Assault is a game mode in Smite. The setting is somewhere in Asgard, from the looks of the map. In Assault, each team of 5 is randomly generated from the player's list of gods, including those on free rotation. This meaning players can all get gods they are very experienced with, or even gods they have never played before. This results in a very rocky, but exciting gameplay for most players. There is one "middle" lane with a tower, Phoenix, and titan on each side.

During the God selection, certain players are randomly chosen to have a "trade offer", meaning they can have a shot of trading with a player on their team for their god. The teammate will have the trade offer displayed on their screen, and can either accept it or decline on their own will.

Assault operates differently from most other game modes. First of all, there are no jungle camps, just one lane of continuous pushing between the two teams. Second, the act of returning back to your base is not allowed, meaning the only time a player can buy items after they leave the base is when they die. This means buying consumables and useful healing and mana regeneration relics is ever the importance. Even with many consumables and relics, players still need to be wary of the possible dangers. One step out of line will land you in the enemy's tower or Phoenix, potentially killing you. The moral of the story is: be careful in Assault, and do not make the novice mistake of leaving the base without buying everything you need, especially relics. 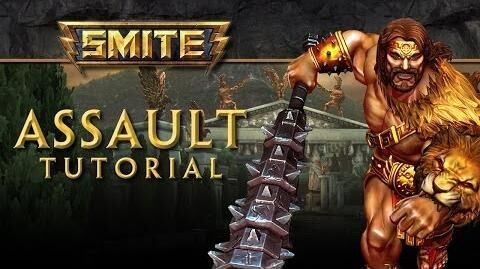 Retrieved from "https://smite.fandom.com/wiki/Assault?oldid=17742"
Community content is available under CC-BY-SA unless otherwise noted.