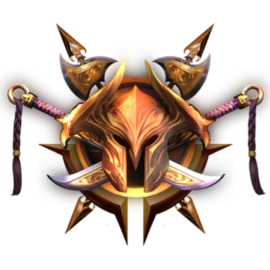 The Battle Passes allows players to unlock Skins, Chests, and other rewards just by playing the game. Completing matches will grant

Battle Points (or BP) with levels up the Battle Pass. A reward is unlocked at every level up. Most rewards require the player to purchase the battle pass. Any premium rewards earned up to that point are instantly unlocked upon purchase. A new battle pass will release every 8 weeks, replacing the list of rewards and reseting all progress to 0.

There are 2 Battle Pass tracks: Free and Premium.

The free and premium tracks share the same progress bar, however the premium rewards won't be earned until the premium pass is obtained. Unlocking it costs 600

Gems (750 for cross-over battle passes such as RWBY, Monstercat, Stranger Things, Transformers, TMNT and Avatar) and also comes with a 50% Bonus to earned BP. Players also have the option to pay 1200

and start at Level 20, instantly unlocking the rewards for those levels.

Battle Points are a type of currency in SMITE. Battle Points are used to unlock Cosmetic Items and other rewards from the current battle pass. Rather than spending them directly, the rewards are unlocked automatically after accumulating a certain amount of Battle Points.

There are several ways to earn Battle Points:

Gems for enough Battle Points to reach a certain level. 100

Gems provide a player with 1000