The Monstercat Battle Pass was the fifthteenth Battle Pass to be introduced to SMITE and the third battle pass in Season 8. It was released on May 18, 2021 and ended on July 13, 2021. 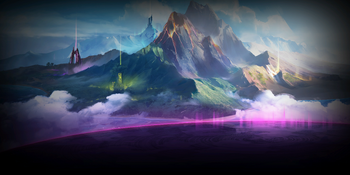 Crab Rave on the Battleground of the Gods with the SMITE x Monstercat Battle Pass. This crossover features four skins inspired by the work of chart-topping artists: Slushii, Noisestorm, Sullivan King, and Koven. Even better: You can unlock four full Music Themes!

Choose from the hot new Slushii track “Valhalla,” the Internet classic “Crab Rave” by Noisestorm, the romantic liquid drum & bass of Koven’s “Give You Up,” or the heavy-hitting grit of Sullivan King’s “Someone Else.”

Earn Battle Points while playing SMITE and unlock all kinds of incredible content such as the Monstercat Avatar, Lost Civilization Loading Screen, and more as you level up through each of the 60 levels.

Get an instant boost by purchasing the Monstercat PLUS Battle Pass. This option includes the Premium Battle Pass and 13,000 Battle Pass Points which unlock all rewards up to level 25, including Slushii Hades.

Free Rewards for Everyone[]

Every SMITE player earns rewards, even without purchasing the Battle Pass. Begin leveling on day one and unlock awesome loot from the FREE track including the Sullivan King Announcer Pack, the Valhalla Music Theme by Slushii, and more!