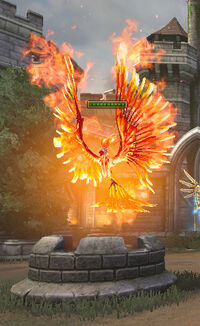 Phoenixes are a type of structure and the second line of defense. They act in a similar way to Towers, but are much stronger and have the ability to regenerate their health constantly. When a Phoenix is killed, the enemy minions that spawn in that lane will turn into Flaming minions, with increased health, defenses and attack. Phoenixes will respawn after three minutes, with a reduced health pool, and with low health which they'll recover over time. As long as all of a team's Phoenixes remain active, their Titan will be invulnerable.

Retrieved from "https://smite.fandom.com/wiki/Phoenix?oldid=7100"
Community content is available under CC-BY-SA unless otherwise noted.