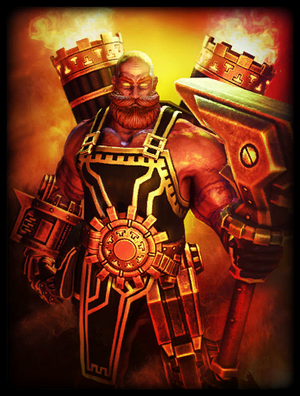 Vulcan transfers 30% of his protections and 15% of his health to his turrets. In addition, when Vulcan is within 30ft of his own deployables they regen 3% of their health every second because of their proximity to the Forge.

Vulcan constructs an Inferno Cannon that shoots fireballs in a cone that deal 65/100/135/170/205 (+20% of your magical power) magical damage to the target every second. The Inferno Cannon lasts until destroyed or another is placed. This inherits Vulcan’s penetrations but does not apply on-hit effects.

Vulcan constructs a Thumper XVI that deals 15/20/25/30/35 (+10% of your magical power) magical damage every second and slows enemies hit by 5/10/15/20/25%, increasing with Focus up to 35%, for 2s. The Thumper XVI lasts until destroyed or another is placed. This inherits Vulcan’s penetrations but does not apply on-hit effects.

When Volcanic Overdrive is activated, Vulcan gains 15/20/25/30/35% movement speed and 10/20/30/40/50 protections. All of Vulcan’s structures fire 50% faster and gain massive regeneration. The Inferno Cannon also fires in a 360 radius and auto targets gods while under the effects of Volcanic Overdrive.

Boots of the Magi[edit | edit source]