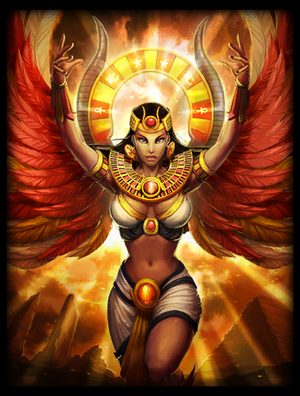 Isis' basic attacks deal magical damage. There is no critical strike chance, lifesteal or other on-hit effects on her basic attack, regardless of items purchased.

Isis' basic attacks deal 30 magical damage plus 25% of her magical power, and utilize a three-swing chain, with the final hit having increased swing time and damage in a small AoE. Basic Attack Progression: 1/1/1.5x damage and swing time.

Isis shares additional HP5 and MP5 with nearby allies. For every player death she witnesses, her aura gains an additional stack (max 10). Stacks reset on death.

Isis flaps her wings, gaining increased movement speed with no backpedal penalty, and sending forth 4 wing gusts in a line, each dealing magical damage to all targets in their path.

Isis silences enemies at her target location. Enemies hit also lose a portion of their magical protections and are slowed for a duration. Allies affected by Isis' Funeral Rites aura gain the missing protections during this time.

Isis plants her staff into the ground at her target location. Allies within its radius take 30% less damage from all sources. All damage mitigated in this way charges up the staff. When Isis activates the staff, it explodes, dealing damage to all enemies nearby and healing all allies based on how much damage was stored.