KNOWN ISSUE: The mini-map will be misplaced until you either change resolution once, or you change one of the UI settings (such as the mini-map scaling). 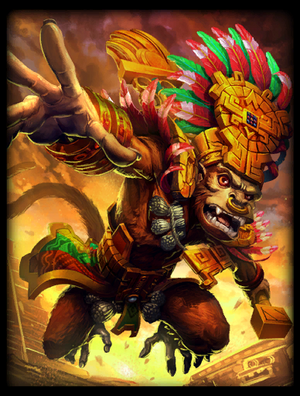 Sun Wukong has been removed from the game and a new Mayan Monkey God,

Hun Batz, has taken his place on the battlefield. The new Monkey has similar abilities, but there are some important differences. Those players that owned

Sun Wukong or any

Sun Wukong skin will now own

Hun Batz and/or the skin equivalent.

Hun Batz's next basic attack within the next 5 seconds additional physical damage. The effect can only apply once every 2 seconds.
Damage: 25 (+20% of your physical power).

Hun Batz commands a monkey through the air that pounces on enemy targets, doing damage on each pounce, hitting each god only once. If the last target is an enemy god,

Shoes of the Magi

Ankh of the Reborn

Mark of the Vanguard[]