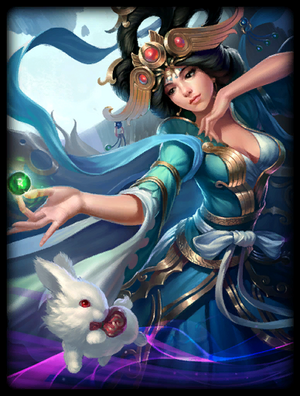 Chang'e can purchase or sell items from anywhere and her Jade Rabbit companion will fetch them. When the rabbit reaches the store then returns, the transaction completes. Only one item can be purchased or sold in this way at a time. Chang'e also gains +25% movement speed with no backpedal penalty when using her dances.

Chang'e performs an evasive spin dance, unable to be hit during the action. For each tick of damage from an ability that was avoided, Chang'e restores 20/30/40/50/60 mana to herself and her allies.

Chang'e twirls, scattering flowers around her, and healing herself and all nearby allies for 50/80/110/140/170 (+30% of your magical power). Chang'e heals herself an additional 50% for each god that she heals. Her Moonflower Dance also reduces the healing of all nearby enemies by 50% for 4s.

Chang'e's Waxing Moon dance is captivating, with this dance dealing 175/250/325/400/475 (+100% of your magical power) magical damage and stunning enemies in front of her 1s. Each subsequent god that is stunned is stunned for 1s longer than the previous one.