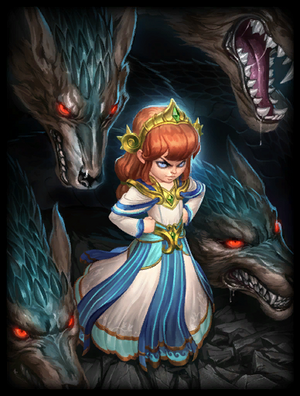 Ancient poems warn of a narrow channel of water so treacherous that death touches all who approach. Sailors must choose to risk their ship, traveling close to the monstrous whirlpool Charybdis, or instead hug the rocky shoals where dwells a creature some say is made from the nightmares of all men.

Scylla, they call her, Horror of the Sea. No ship that dares sail in her waters goes unscathed. Those that cling to survival whisper panicked tales of enormous black tentacles tipped with slavering hound heads ravaging whole ships to splinters with pitiless precision. Though it's her laughter, they say, that's most horrible; child-like, delighting in blood soaked murder as men are dragged into the dark abyss.

Poets have tried to romanticize this beast, to provide some humanity to her monstrosity. They write she was once a beautiful Naiad, wronged by a jealous priestess and transformed. Yet the old poems say she was born this way, beget by gods full of jealousy and loathing; dropped into the sea to terrorize mankind.

Would that she had remained in the sea, but the nightmare has come ashore. Dragged by dog-headed tentacles she roams our streets, plucks us from our beds, and fills the night with disturbing laughter. Scylla has come, and not even the gods can help us.

Each of Scylla's abilities gain an additional effect at max rank. In addition, Scylla gains 20 magical power for each max rank ability.

Scylla creates a magical field that applies a 30% slow to enemies in the radius. After 5s it detonates and damages 90/140/190/240/290 +80% of Magical power. Scylla may activate the ability again to detonate it early. At max rank, enemies in the area also have their Magic Protection reduced by 25%, and targets hit by the damage are slowed for an additional 1s.

Passive: Scylla gains 4/6/8/10/12 MP5 while this ability is not on cooldown. Active: Scylla summons a sentinel to the target area, granting 40/50/60/70/80 vision of enemies for 5s. Scylla may activate the ability again within 5s to move to the sentinel location. At max rank, the vision is granted through line of sight blockers, and placement range increases by 5.

Scylla reveals her true nature, becoming CC immune for the next 6s, and gaining +35% movement speed. She may make one powerful attack during this time, dealing 400/500/600/700/800 +120% of her magical power as damage. If she kills an enemy god with the attack, she gains another 6s and may attack again. At max rank, the movement speed bonus doubles.

Most items have been combined into trees that allow you to purchase more than one item from it. Note that, unless specified, the price and stats on the Tier 3 items have not changed. New combined trees are listed below:

The following items are still available as single-item trees:

The following items have been removed for the time being. Some may be reintroduced with changes in the near future, to better fit the above trees.

The following Tier 3 items had changes: