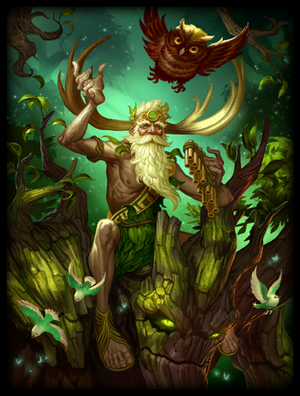 Enemies that successfully land a basic attack on Sylvanus have a 25% chance to be rooted for 1s. This may only happen once every 12s.

Sylvanus's treant launches his rooty hand out in front of him. The hand stops at the first enemy god hit, stunning them for 1s and pulling them back towards Sylvanus.

Sylvanus's treant slams his large trunks into the ground causing large thorny roots to break out of the ground around him. Enemies hit are knocked up and take 60/70/80/90/100 +25% of your magical power every 1s for 5s as damage.

During the next several weeks, we will be testing an entirely new Matchmaking system. THIS SYSTEM WILL NOT BE AVAILABLE ON PATCH DAY. The basic groundwork was added this patch and will be rolled out over the next several weeks. This is a big system wide change, and we will be working through any issues. Please bear with us a we run trials on it; things may seem "worse" before they get better.

Once fully implemented (still a few patches out), the major new features of the Matchmaking system will include:

Our goal with this change is to create a better experience for players joining league, by setting a reliable promotion point, and removing the "Bronze 5" stigma of our current system. It's important to note that they way our League system works, very few players are actually playing at a Bronze skill level. The average skill point is between Silver and Gold Tiers.