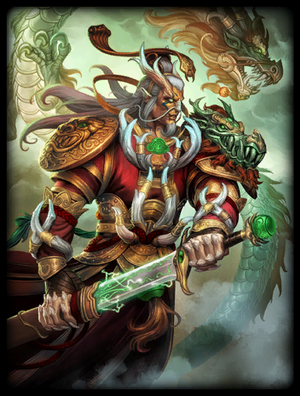 Ao Kuang's sword can hold up to 3 Energy Charges, and regenerates charges while out of combat. Each time Ao Kuang casts an ability, an energy charge will be consumed if available, increasing the damage of the ability by 5%. If Ao Kuang is out of mana, he will use Energy Charges to cast abilities instead.

Ao Kuang teleports forward into stealth, leaving behind a watery form of himself. He remains in stealth for 5s or until he attacks or takes damage. Ao Kuang may activate this ability again to detonate the watery form, dealing 90/140/190/240/290 +70% of his Magical Power as damage to nearby enemies.

Ao Kuang summons 6 dragons to his side. For every successful basic attack Ao Kuang makes, a dragon will dive to the target dealing 40/60/80/100/120 +30% of his Magical Power as damage. This ability ends after all dragons are used, or after 10s. Ao Kuang may activate this ability again to send forward any remaining dragons in a ranged attack, dealing 50% damage per dragon and Slowing 30% for 1s the first enemy hit. The slow duration increases +.25s for each remaining dragon that was sent forward.

Ao Kuang unleashes a storm of lightning from his sword, damaging all enemies in front of him for 90/140/190/240/290 + 50% of his Magical Power. This hit is considered a basic attack, and will activate item effects and send forth dragons from Dragon Call.

King of the Eastern Seas[]

A new system has been implemented for Friend Referrals that adds numerous rewards and benefits for you and your friends! You can link a new Account to a reffering friend via our new in-game interfrace, during account creation, or on the www.smitegame.com website. Once you link your account to a friend the following rewards and goals will be available, and can be tracked using the new friend referral menu:

Any new tracking systems will start fresh on the update. However, we will keep track of the amount of friends you have referred before on the old system.

“While Chronos is designed as a late game magical carry, his early game tends to be a bit too weak in comparison to other Mages. Both of these changes are designed to help him in the early part of the game, and we think the adjustment to Wheel of Time will also increase the enjoyment and clarity of using that Section.”

“Cupid has been performing fairly well in comparison to other Hunters but the long animation on his ultimate meant that he was being interrupted more often than he should. While a small adjustment, this change is to help Cupid land his ultimate more reliably.”

“Freya is designed to be a late game single target burst Mage. She accomplishes this in many ways, but due to her hyper late game carry potential we felt the number of hits she could confirm on targets falling from banish should be addressed. By decreasing how long it takes to fall after banish ends, we've reduced the number of shots the target takes before they regain control. This is a fairly substantial adjustment to Freya, and one we'll be watching closely going forward.”

“Similar to Freya, Mercury is a hyper late game carry that could confirm several hits on targets thrown by Special Delivery. We've adjusted how high targets are thrown, while not affecting the distance they are thrown, as a way to reduce the number of confirmed hits without affecting his ability to displace targets. Like Freya's adjustment, this is a fairly substantial change, and we'll be watching it closely and adjusting as needed.”

“We are happy with Nu Wa's playstyle but she is slightly over tooled for damage given all that she brings to a team. These adjustments are intended to bring her a bit more in line.”

“Serqet is one of our most mobile goddesses and we are very happy with the way her timings have worked out and the way she feels in play. Her damage potential on Deathbane was a bit too high, and we've brought it down to bring her in line with other Assassins.”