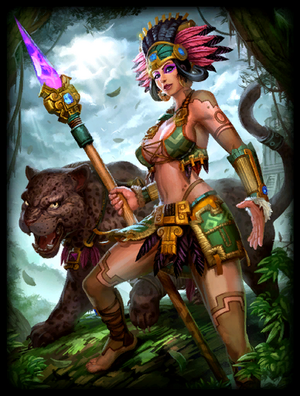 If Awilix strikes first from out of combat, she increases her physical power by 30% for 2.5s.

Awilix mounts her Panther Suku, gaining 25% movement speed but decreasing strafe speed by 50%. Awilix may leap off of Suku to deal 80/130/180/230/280 (+80% of your physical power) damage to all enemies in the target area. Canceling this ability before leaping will not trigger its cooldown.

Awilix flips over the last enemy she hit within 1.5s, rooting, crippling, and dealing 60/90/120/150/180 (+50% of your physical power) damage as she passes over them. The damage dealt is modified based on the next attack in Awilix's basic attack progression, increasing by 1x/1.5x/2x. If the next attack is her third attack, then she also hits all targets in the area around her.

“We love that Ao Kuang is an all-in style melee-mage, but his burst potential was a bit too high, and Dragon Call when fired as a projectile was allowing for too much damage while maintaining a safe distance. This patch also features a cleanup to his passive, and a fix for the notorious Kumbhakarna Sleepy issue.”

“Some huge changes for Nox this patch! Nox was capable of dealing large amounts of magic damage but the leash component of her ultimate Night Terror exposed her to too many fatal situations. We wanted to give her a chance to sit at range and control the fight while still remaining survivable. With the addition of a delayed stun and the chance to hit multiple targets, Night Terror now gives Nox a strong teamfight presence. Changing her passive to include more damage mitigation and removing her need to stay near her target gives her many more options on the battlefield.”

“Serqet's Cobra Kiss duration, at the later stages of the game, was allowing her too much control in using all her damaging abilities before a target could react. Reducing the duration makes Serqet rely more heavily on her positioning and mobility to secure kills.”

“The change is intended curb a bit of Vamana's late game damage, or force him to specialize more in his itemization, consistent with other warriors.”

“Magma Bomb can no longer ignore knockup immunity when knocking up players, allowing for a few more counters to the Smith of the Gods. In addition to removing the mini-stun we have added a hit indicator for where the bomb will land along with slightly reducing the range of the ability. This should help players squaring off against Vulcan's potent lane poke.”