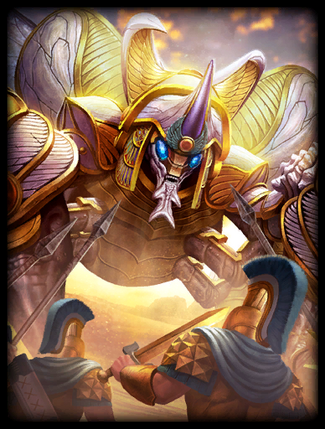 Every 5s, Khepri applies a shield to himself and nearby allied gods for 3% of the target's Maximum Health for 15s. The rate is slowed to every 10s while in combat (max. 15%).

Khepri lunges forward, dealing 80/140/200/260/320 (+40% of his Magical Power) damage to enemies he passes through. If he connects with an enemy god he stops, grabs them, and starts pulling them backwards. Enemies are silenced for the duration of the pull. Cost: 60. Cooldown: 15s.

View the Developer Insight to learn more about Khepri's design and development process.

“We want players to feel rewarded for making smart item choices and make sure they have a wide pool to choose from. We looked at some of the underperforming items and tweaked them to make them more attractive for players to utilize.”

“We removed the Slow on his Ultimate entirely. His Ultimate was too potent and offered little counterplay, especially when paired with the Slow on his Undead Surge. We like his burst playstyle and zone control, but we felt the Ultimate granted him too much safety, and removing the Slow takes away some of this safety.”

“Bellona's kit has many strengths, and in this patch we wanted to hit key points where we felt this strength was too much. The Slow granted from Shield Bash was too potent for a single point investment, and late game Eagle's Rally was coming up too often. This should allow for more counterplay at both early and late game stages.”

“Ravana is in a much better place since the last changes, but we wanted to bring him up a little more. We increased the damage of his Overhead Kick and 10-Hand Shadow Fist slightly to help him trade better, and in conjunction with this allowed him to avoid damage and heal slightly more. These changes should bring out the dueling strengths that we like in Ravana.”

“Ratatoskr is meant to be a mobile menace. Unfortunately, his mobility made him too safe and frustrating to handle. Ratatoskr can now only Dart 3 times maximum, and his Ultimate will take longer to get Ratatoskr to safety. He should have some risk of engaging into the enemy team, and these changes should allow enemies the chance to capitalize on greedy plays.”