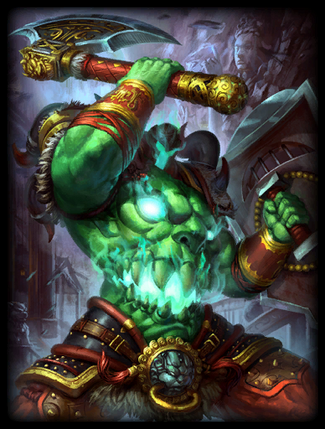 Xing Tian gains stacks of Smouldering Rage each time he hits an enemy with an ability (max 12 stacks). For each stack of Rage Xing Tian has, he gains HP5 (+3). Stacks last 18s.

Whirlwind of Rage and Steel[]

“Bluestone Pendant was an item that offered Mana sustain instead of Health sustain. Unfortunately over the course of balancing it was either too potent or lackluster. This patch we are shifting the item away from a sustain focus. Instead, it will now augment ability damage users by providing a damage over time on enemies hit by abilities. The goal is to have a meaningful choice between waveclear and aggression, or sustain and defences for Physical users.”

“Mail of Renewal is an interesting item that exists to help players persist during and after a fight. We have increased its overall effectiveness while making sure we kept the high end potential of this item from going out of control by making it refresh instead of stack in place. This should make the item more attractive overall.”

Hide of the Urchin[]

“Ao Kuang was seeing very positive performances at the highest levels of play, but struggled in the hands of less experienced players. One of the biggest strengths at higher level play was the low Cooldown nature of Wild Storm. We have shifted some of the power away from this skill in favor of increasing the strength of Dragon Call. The goal is to balance out Ao Kuang over the multiple skill ranges he was being played at.”

“Guan Yu is a Warrior who excels around being in a fight, shredding Protections, healing his team and dashing through targets. We wanted to reward him more for doing these things. His Passive will now also build stacks on dealing damage to enemy gods and the Cooldown on his dash was reduced. He should now be able to assist his team with more powerful heals and use his lower Cooldown to be in better positions.”

“Khepri was brought much more into line with the recent changes, but we still saw him over-performing. By increasing the Mana cost of Rising Dawn increasing the Cooldown on Solar Flare, when you choose to save teammates will become a more impactful choice.”

“Poor Kumbhakarna was underperforming across the board so we looked at some key aspects of hit kit. We brought up the damage and root duration of Groggy Strike as it was a very long channel for not much payoff. In a previous patch we split the damage from Epic Uppercut so that he could deal some more upfront damage but it reduced the Area of Effect damage of the landing. We like the split, but want to bring back some of the reward for hitting players with the landing of the Ultimate.”