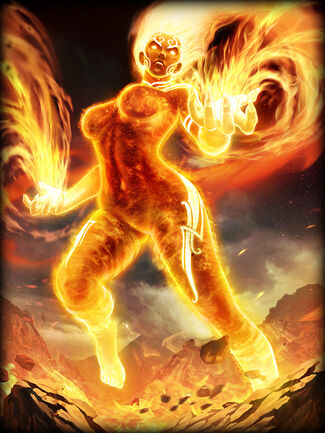 Sol burns down her manifestation, gaining movement speed (20/25/25/25/30%) and ignoring all movement penalties, while leaving a trail of fire behind her that damages enemies (20/40/60/80/100 + 25% of your Magical Power) every .5 seconds. After 3s Sol loses corporeal form for a short time and her trail explodes, Stunning enemies for 1.5s. Sol may leave her incorporeal form early. This ability provides 10% Heat. Cost: 60. Cooldown: 15s.

“This item is certainly seeing some play as of the recent changes to it. We love this item since it has become a compelling choice, but it was slightly too efficient when the Passive proced. We are toning down the Passive to bring this item back into line.”

Shoes of the Magi

“Often Awilix players find themselves having to hit a very small timing window from when someone took off to when they went behind a wall. We want to reward Awilix for saving the Ultimate to pull a fleeing opponent, even if they have jumped over a wall.”

“Hou Yi is a Hunter who lacks a hard steroid to really allow him to box, instead focusing on landing powerful (and Stunning) Ricochets to make up for this. By lowering the Cooldown Hou Yi players should feel more impactful more often while also taking less of a risk when they go for those double bounce trick shots.”

“Mercury players who use Fastest God Alive to its fullest often see themselves landing very powerful in-hands out of their Ultimates or when ganking. We like this playstyle and how it forces people to go just far enough with their Ultimate so they can turn around and punch the god with a powerful hit. Because of this we have chosen to up the payoff potential of this Passive.”

“After looking at Sobek's performance and his limiting factors, we chose to lower the Mana costs on his abilities as well as give his Ultimate more utility. Lowering his Mana costs means he should be able to protect his teammates and catch enemies much more often. Increasing the utility on his Ultimate means he has better engage potential with this ability, while also allowing this Ultimate to act as a much stronger deterrent for chasing enemies.”

“When viewing Xing Tian's performance, we noticed his Ultimate was still providing a high amount of damage tied to a very potent, potentially team-wide, Crowd Control effect. We have increased the Cooldown to 100s at all ranks to control the potency of this skill to still be strong, but more manageable.”

“Zhong Kui is a Mage that needs to get into the middle of the fight to be effective. While he has tools in his kit to help him, we felt that in too many situations he just didn't have what he needed to get the job done. We have increased some of his base stats, as well as allowed him to have Magical Protection scaling to help him in later phases of the game. We will be watching these changes closely to see how it affects The Demon Queller.”