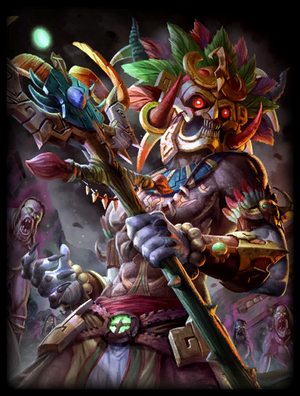 Ah Puch raises up to two decaying corpses from the underworld that surge forward exploding on anything they touch, when they reach maximum distance, or when Ah Puch reactivates Undead Surge dealing 90/110/130/150/170 (+35% of your Magical Power) damage and Slowing targets hit by 40% for 3s. The corpses collapse after exploding remaining behind. Cooldown: 10s. Cost: 70/80/90/100/110.

Ah Puch throws a charm from the underworld which awakens a decaying corpse that applies miasma to targets in an area and falls to the ground, remaining behind. Targets take 32/34/36/38/40 (+15% of your Magical Power) damage every second. After the duration, targets take an additional 20/30/40/50/60 (+10% of your Magical Power) damage and are Stunned for 1s plus +0.5s for each time they were healed by an ability during the initial duration. Cooldown: 10s. Cost: 70.

“This patch we are introducing Achievements into SMITE! Over 100 Achievements have been added, including Lifetime, Combat, Objective, and Kill Achievements. Achievements can be accessed from your Player Profile.”

“It's been a long time since Mages had a starting item other than Vampiric Shroud to pick from. Soul Stone offers no starting Health, but provides significant Mana and a nice damage spike for early clear or poking at enemy gods.”

“It might not come as a surprise that Devourer's Gauntlet is getting an adjustment. This potent item is seeing a reduction in it's base power, and an increase in the number of stacks it takes to reach it's full potential. This will give more room for specifically Hunters to build and counter-build with a little more variation in the early laning phase.”

“With this change and the adjustment to Heavy Hammer, we are looking to make Frostbound a bit more appealing to build into.”

“Heartseeker saw no adjustment coming into Season 2 when its Magical counterpart did. Combined with the reduction to Devourer's Gauntlet, Heartseeker is now a potent option for many Physical gods.”

“Heavy Hammer was just too good of a buy for aggressive starting builds. We've reduced the Health and the Slow to help mitigate the potency it gave to early jungle invades.”

“This change goes in line with the fix from last patch, in which Magi's would not be consumed if you were already CC immune. We've adjusted the numbers to better bring it in line with its new functionality.”

“With the changes to Talaria and Travelers, we are looking to make them more competitive options versus other Boots and Shoes, while also giving roaming supports an item that better rewards their mobile play style. Increasing the previous Movement Speed boost from 10% to 14% along with adding Gold and Experience makes this item a unique fourth option.”

“Ao Kuang is getting a fairly significant pass in this patch. The Dragon King has been one of the lowest performing gods in SMITE since his Season 2 damage adjustments. The adjustments to Water Illusion and Dragon Call both have balance implications, but are also big quality of life improvements for Ao Kuang players. The changes to his Ultimate are more substantial. Slightly increasing the range makes it a little easier to catch fleeing players. Adjusting the kill threshold to be flat at all ranks makes it easier to use early game at the cost of late game potency. Finally adding a heal for a successful execution gives Ao Kuang more options to re-engage, where he was often forced to use his ultimate to escape with low Health.”

“Mighty Yawn gets a mighty buff, and Epic Uppercut gets a quality of life improvement, having some of its damage split to be upfront rather than all on landing. Striking a Crowd Control immune target with your Epic Uppercut means they will now take some upfront damage instead of avoiding it all.”

“Neith is one of Smite's ability based Hunters, and this adjustment is to help bring her a bit better in line with her carry counterparts.”

“Yep. Fixed those 2x Boots on his recommended list! In all seriousness, Osiris' base Attack Speed adjustment going into Season 2 coupled with downward adjustments to his core items put him in a tough spot. While still being lower than it was in Season 1, this starting Attack Speed increase will help him to utilize his strong Basic Attacks earlier.”

“It's happening! Sun Wukong gets some love this patch, with a minor increase to his clear and a meaningful Stun duration scaling change to 72 Transformations. We might not be done with the Monkey King, but we're taking this one cloud hop at a time.”