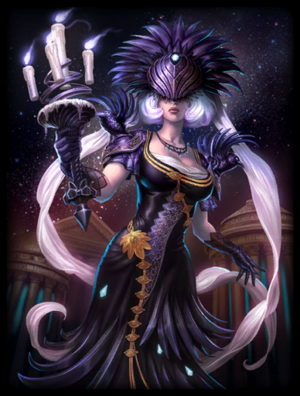 “Nox has had a significant redesign this patch.”

Flame of the Night (Passive)[]

Nox's candles gather energy from all abilities she uses. For every ability Nox casts a candle is lit. For every candle lit Nox gains +3% Magical Power. When Nox takes damage one of her candles is blown out.

Nox dashes forward, dealing 70/110/150/190/230 +40% of her Magical Power as damage to all enemies. If she hits an allied god, she leaps into their shadow, traveling with them. When Nox exits a shadow, she deals damage again in radius 20 around her. Nox may cancel this ability early to exit shadows. Cost: 90. Cooldown: 15s.

“Most of our itemization adjustments this patch are focused around Hunters, and the recent meta shift. We are primarily adjusting early game builds in this patch, and we will look to make more substantial adjustments to the late game as needed in subsequent patches.”

“Ancile, as a stacking item, has some ramp up time and was difficult to pick up in time to get the Protections and Cooldown Reduction you wanted for a build at a comfortable timing. Reducing its cost means you can start stacking sooner.”

“Bluestone Pendant's effect reaches farther beyond the early game than we'd like for a starter item, and is seeing a reduction in its percentage based Passive. Its power is also being reduced.”

“This item exists to fight crits. With some games having two or more players per team with crit and this item still not being purchased... ‘Probably needs a buff.”

“Heartseeker's cost is being increased, to make picking it up a bit slower.”

“Runic Shield is Witchblade's mystical cousin, but costed slightly too much to be picked up in some situations.”

“More Physical Protections are being added to better highlight Shield of Regrowth as a hybrid item.”

“Executioner is getting a slight adjustment to bring down it's Attack Speed contribution to an overall build.”

“Witchblade's purpose is to target enemy players who are built for in-hand damage, and is being scaled up to match the Attack Speeds these kinds of gods are able to achieve given Season 2 itemization.”

“Ah Puch's Ultimate will now end if he dies. This is a major change in how players fight him, and add additional vulnerability to the God of Decay.”

“Hou Yi's dash has been reworked to better match his snappy playstyle, and give him more options when deciding to escape or commit to the fight. Once in the air, he'll be given a Golden Crow's eye view of the battlefield.. eh? eh?”

“Ne Zha's getting a new passive! One of the most requested abilities for a rework, this new passive opens up a vast number of new tactical options for the Third Lotus Prince.”