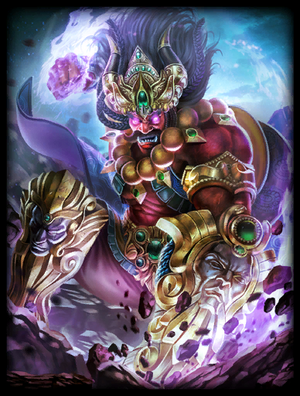 Each successive hit within 5 seconds adds to Ravana's combo chain, allowing Prana Onslaught to do an additional 7.5% damage for each hit in the combo, up to a maximum of 60% total. Additional hits above 8 will not count towards this damage again until Prana Onslaught has been fired.

View the Developer Insight to learn more about Ravana's design and development process.

“Thanks to the community for voting on your favorite SMITE character voices for our new announcer packs! Swagni was by far the leader, with Nox coming in second. Both will be available through the Season Ticket in this patch.”

“Season Ticket has had a major upgrade this patch, with new features and new unlock goals! We want to remind players that Season Ticket can be played through to the Smite World Championship in January 2016, and will include matches from the upcoming Fall Split as well as select tournaments. There is still plenty of time to get your ticket and start earning rewards from picking games and playing SMITE!”

“A highly requested change, the point at which lifesteal items can allow soloing objectives is being shifted to much later in the game.”

“The warding meta-game within Smite has become stale. There is currently no scarcity in vision. Reducing the vision range of Basic Wards and incentivizing removing wards is expected to increase gankability in the laning phase.”

“XP rewards for god Kills in the early game have been adjusted. The calculations now grant less for low level victims, but still are rewarding at higher levels.”

“There are a number of modifications to the jungle and to Hand of the Gods happening this patch. The base stats of several camps have been adjusted to reflect this.”

“The mid camps are returning to their first spawn at 0:10 to encourage more diversity in teamwide jungle starts. Along with this, we are adjusting the flow of the jungle by offsetting and reducing many of the jungle camp respawns. We want the jungle to feel fluid and varied, giving the jungler role in Conquest more options for possible routes while ensuring they have enough to do in between ganks.”

“HoG has dominated SMITE active items for quite some time. It's become somewhat of a crutch to Conquest, and has reduced the effectiveness of certain counter-picks and matchups throughout the game. With the changes below we've adjusted the effectiveness of HoG in lane, requiring more buy in for it, while preserving its ability to secure Jungle Camp buffs.”

“For a while Wrath has been the primary indicator of which team would take an objective. While we still want Wrath to have the ability to secure objectives, we also want well timed high-damaging ultimates to be contenders. This change from percent health to flat damage on Wrath allows that in the late game.”

“Sprint as a whole was providing too much utility as an escape tool in the early game and transitioning into a heavily offensive skewed ability in the late game.”

Shoes of the Magi[]

“Even with earlier adjustments, Magi's Blessing is over performing; activating multiple times in skirmishes. This item has moved outside of its intended position as an anti-cc tool to an obligatory luxury item for all classes. We are extending the cooldown on the passive and adding a bump in gold to focus this item more precisely.”

“Heartseeker has always been an exciting item. However, we are shifting its focus away from farming and to a more exciting stacking method. Along with this, the amount of stacks has been greatly reduced, meaning that subsequently each stack is worth far more Physical Power.”

“Since these pesky cat's natural predator (Hand of the Gods) is seeing a reduction, the kitty's health is being reduced as well.”