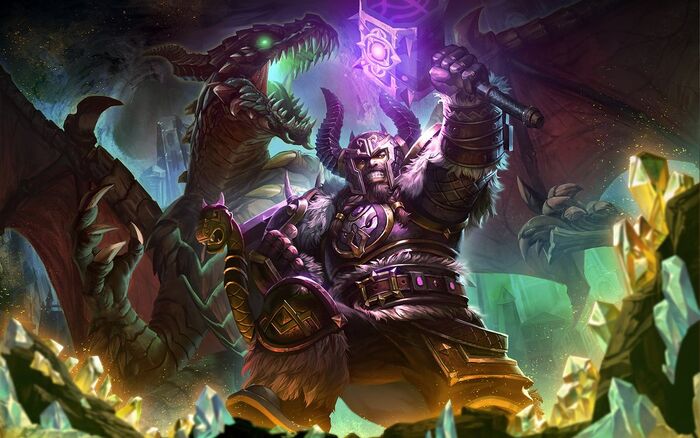 Fafnir gains 4 bonus gold from all minions, structures, kills and assists. Fafnir also gains bonus Protections based on the amount of gold he is currently holding. The bonuses gained from this ability are capped at 30 Protections with 1000 gold in hand.

In dragon form, This ability has a larger area of effect and can buff multiple allies.

In dragon form, Fafnir can leap much further. Also, this ability deals increased damage (40/60/80/100/120 + 30% of your Magical Power) that ticks every second for 3s and Fafnir Stuns the enemy closest to him for 2s in addition to Disarming.

Fafnir transforms into a terrifying dragon and is untargetable during the process. When he emerges in dragon form, nearby enemies are poisoned, taking damage (80/100/120/140/160 + 40% of your Magical Power) every second for 3s. He remains in this form for a duration or until the ability is activated again. As a dragon, his abilities have additional effects and his basic attack changes to a Dragon Breath that deals damage (10/15/20/25/30 + 10% of your Magical Power) 3 times per second. Dragon Breath can not proc item hit effects. Cost: 100. Cooldown: 90s.

“These items aren't seeing as much play as expected, so they are all receiving a small bonus to their primary stat: Health. Health items have high power potential, so adjustments to this tree will be small and careful.”

“Ah Muzen Cab players have a lot of flexibility on when and where to place Hives, and this reduction should make that process more convenient.”

“He Bo's low cooldowns define him as a mage. Waterspout's reduced mana costs will allow him to better fit this specialty.”

“Kukulkan excels when he is able to maintain proper spacing between himself and enemies, especially towards the late game. By reducing Slipstreams cooldown per rank Kukulkan will more often have one of his spacing tools available to him.”

“Raijin is a character who has a lot of potential to disrupt and poke out enemies, and when choosing to use his escape ability offensively with Raiju he can have some hefty burst as well. With this change we want to limit the amount of burst that comes from the easiest to confirm combo.”

“Ratatoskr has had a fairly powerful release, so we are looking to take away some of his power throughout the game. In addition to his hotfix adjustment Dart is seeing a base damage decreased while Flurry is seeing adjustments in its cooldown and protection shred. We will continue to monitor the new Ratatoskr closely to ensure he is in a healthy balance spot.”

“Storm Kata when combined with Bluestone Pendant was allowing Susano to control the pace of the early game. By removing some of the edge on Storm Kata and removing its ability to proc Bluestone Pendant (and other item effects) twice, players should find more room to play against this mobile assassin.”