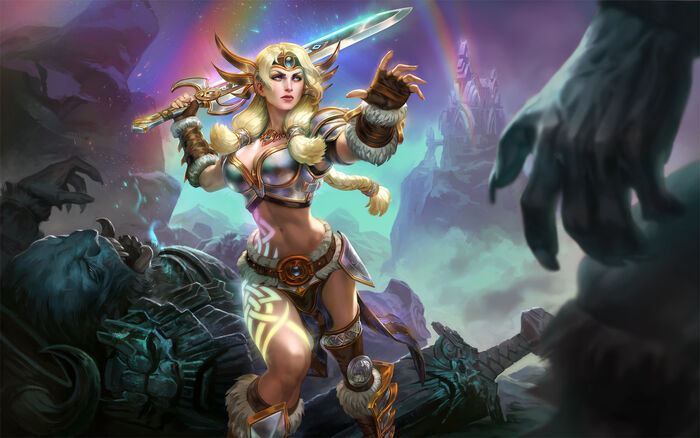 “We want Ancile to serve as an item that allows Physical characters to have a more direct and aggressive counter to mages. By reducing the cost, this item should have an easier time being utilized in various builds.”

“We are reducing the cost of items in the Glowing Emerald Tree to make them more attractive.”

Mark of the Vanguard

“With our most recent adjustment, this item provided too much sustain for the amount of damage mitigated, leading to us removing the HP5 from MotV. Watcher's Gift is now more clearly the sustain starter item for Warriors or Guardians while Mark of the Vanguard is for direct mitigation and aggressive gameplay.”

“Over the course of Season 3, Power Potions have become a hot topic for both the community and the competitive scene. After receiving feedback at all levels we are working on an overhaul to Power Potions that will solidly focus them towards the mid and late game and no longer make them a part of starting builds. With this goal in mind, we have decided to temporarily remove the items until 3.14, when they will have a new design. We feel that removing them now will more accurately reflect the game state of 3.14, where they will be an option in the mid game instead of a requirement at the start of the game.”

“Similar to Ancile, we like Runeforge serving a specific role which is to allow players who build into or have slows to provide a powerful utility to themselves and their team. While effective the stats the item provided were not enough to justify the high cost and low stats it came with.”

“Soul Eater overall has been over performing as a sustain and healing item. We are reducing some of this effectiveness in this patch.”

“Watcher's Gift should enable gods in the early game to rely on sustain instead of raw survivability. We have added 5 HP5 to make the sustain more reliable and adjusted the Mana and Health returned on this item to compensate. Overall with this change Watcher's Gift will provide more Health and Mana during the laning phase.”

“Cabrakan has been smashing up the battleground after his recent adjustments. The changes made him a bit too tanky relative to his increased damage. In this patch we adjusted Refraction Shield, lowering the base damage slightly and lowering the overall protections he gains conditionally to compensate for his passive mitigation. Additionally, Tectonic Shift is now more consistent in how many hits it takes to destroy, allowing for better readability and counterplay when against Cabrakan.”

“Guan Yu had a major adjustment last patch and after watching his performance we want to make sure he is still healing for an impactful amount while allowing him to use his new passive more often.”

“Mercury is a character who excels in situations where he can get in and box his opponents or isolate them into 1 on 1 scenarios. By increasing Maximum Velocity's duration in his early ranks as well as making Special Delivery pack more of a punch in late game scenarios, Mercury will be better equipped in these favorable scenarios”

“Rama is one of the premier basic attack hunters who was affected by the removal of Golden Bow. He is getting an upward adjustment this patch on Astral Strike to maximize his basic attack strength.”