“We have a lot on the table for Patch 3.4, Winter's Bite! First, our newest Goddess joins the ranks; hailing from the Norse Pantheon Skadi and her companion Kaldr are ready to join the Battleground of the Gods. In addition to a new god, the 2016 Season Ticket launches, boasting a large number of new skins and rewards to be earned through playing SMITE and watching SMITE eSports!

This patch also brings some adjustments to a few gods who were under-performing as well as addresses some of the concerns around Solo laners in Conquest gaining too much experience. Additionally, a few items are seeing tweaks to better solidify their identity and their strengths. We are excited for everyone to get their hands on the new adjustments and see how they play out!” 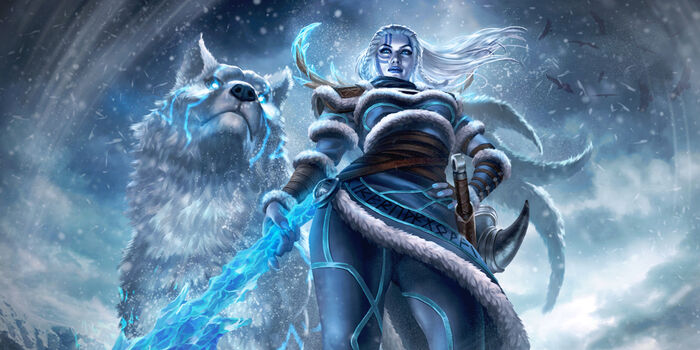 Kaldr fights by Skadi's side and has 2 forms: Beast and Elemental. While in Beast form he can attack enemies and be attacked. While Elemental he is immune to attacks and regenerates health over time. His forms can be controlled with Skadi's Rune of the Hunt but he will be forced into Elemental form if he loses all Hit Points.

Rune Of The Hunt

Toggle: Skadi marks an enemy for Kaldr to hunt. While toggled on, Kaldr assumes Beast form, chasing and attacking the marked enemy. If a marked enemy dies Kaldr attacks other enemies nearby. When toggled off, Kaldr stops attacking and returns to Skadi, reverting to his Elemental form on the way. This ability can be activated at rank 0 and Kaldr gains new skills as it ranks up. Cost: None. Cooldown: .5s.

Skadi freezes the ground for 5s at a target location. The icy area deals damage to enemies that touch it and continues to deal additional damage every .5s they stay on it. Gods who step on the ice lose control of their movement and slide across. Also, Skadi's movement speed increases by 25% while standing on the area. Cost: 70/75/80/85/90. Cooldown: 18s.

Snowstorms surround Skadi and Kaldr. Upon activation, enemies in range become Rooted and Kaldr is restored to full health. The storms persist for 5s while dealing damage to enemies every .5s and making Kaldr immune to damage. Cost: 80/90/00/110/120. Cooldown: 90s.

“This is a very targeted adjustment to the amount of Gold and XP that can be farmed in solo lane. We're investigating additional adjustments to that side of the jungle in future patches, but this should be a good first step in closing the level gap generated from the island.”

“While our fix to Impale in 3.3 helped out, Anhur still is struggling to find his footing. This patch we're reducing slightly the cost of his clear, while also improving the benefit of his passive.”

“We're expecting a lot of people to be surprised by this one. Hercules has been one of our lowest performing gods, across the board at all skill levels, this season. And we think everyone feels it, as his play-time has slowly decreased to a trickle. We're improving the benefit of his passive as he levels, and also starting his base Attack Damage and Movement Speed more in line with other Warriors. Additionally we're reducing the cooldown of Earthbreaker to better line up with it's combo-paired ability; Driving Strike.”

“Kukulkan is getting some much needed love this patch! We're adjusting the mana cost on Whirlwind (a big community request) securing Kukulkan's position as the king of clear, and also improving the scaling and late game potential from Zephyr.”