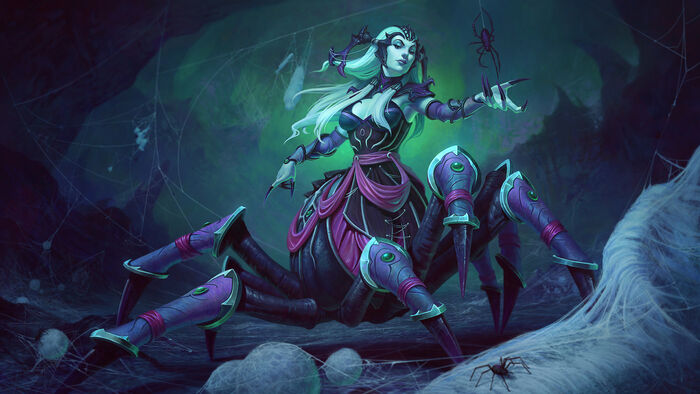 “Arachne has undergone a visual upgrade. This means she now has a new model, textures, animations, FX treatments and new card art. Her mastery skins will be modeled in her new style.”

“With this update we look to simplify Fleeting Breath. It now will damage and stun users who are healed during its effect for a flat amount, instead of trying to calculate the number of heals that happening. We are also letting the God of Decay summon a second Corpse a level earlier on Undead Surge, which should provide him additional sustain and burst power at a crucial stage in the game.”

“Now, water can flow or it can crash.”

“Since Jing Wei's release she's been underperforming, and so in her first post-release patch she'll be getting several upward adjustments! Jing Wei focuses on mobility and basic attack damage to succeed in her role, and we want to improve that. Her ability to farm and move around the map is great, but her ability to directly box and be effective in teamfights is more limited. Increasing her base power as well as the buffs she receives, should highlight her great late game scaling and give her more room to box effectively.”

“Nox is getting a cooldown reduction on her primary damage and clear, Siphon Darkness. Additionally, we're adjusting her potency into the mid and late game. Shadow Step now has increased scaling, rewarding Nox players for choosing to use this skill aggressively instead of just passively. While difficult to coordinate, dashing through an enemy into an ally, then popping out, has a lot more punch!”