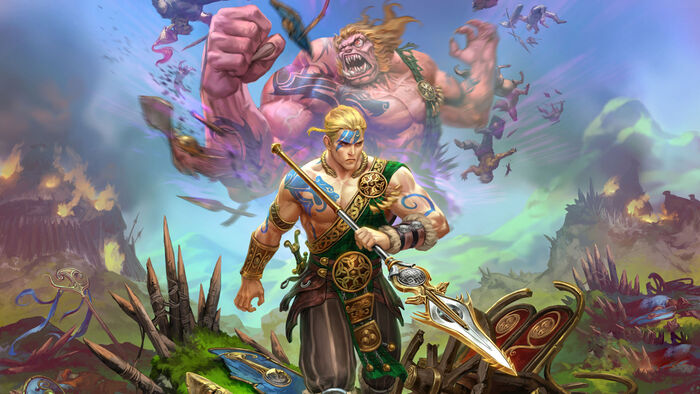 Cu Chulainn's Mana, Mp5, and Mana Heals are instead applied to his Health pool. Abilities consume Rage, which stops regen at 25, but he gains Rage upon Hitting with his Abilities as well as 1 Rage for Basic Attacks and when he or allies are Damaged. After 3s above 85, he goes Berserk. While Berserk, Cu Chulainn gains Power and a Health Shield.

Cu Chulainn thrusts his spear forward, damaging all enemies in front of him and stunning less powerful minions. Successfully hitting an enemy with this ability restores 6 Rage (to a max of 18). Barbs from his spear stick in opponents and reduce their Healing taken for 4s. In his Berserk Form, Cu Chulainn instead slams his massive arms down, damaging and rooting all Enemies in front of him.

Cu Chulainn vents his anger as superheated steam, increasing his Movement Speed and draining his Rage. Every .5s while in this state, all enemies within range are damaged by the heat. Vent Anger does not return Rage. In his Berserk form, Cu Chulainn Vents Anger automatically.

Cu Chulainn vaults over his spear, leaping to a target location and slamming it down to damage enemies around and in front of him. Successfully hitting an enemy with this ability restores 6 Rage (to a max of 18). In his Berserk Form, Cu Chulainn instead charges forward damaging and driving all enemies back with him.

Cu Chulainn swings his spear Gae Bulg in a circle around him, Damaging and Knocking Up all Enemies. Successfully hitting an enemy with this ability restores 12 Rage (to a max of 36). In his Berserk Form, Cu Chulainn instead gives a terrifying yell, Damaging all Enemies and causing them to Tremble.

Some knights seek honor and others seek vengeance. Your destiny along your quest as Osiris will be defined by the choices you make. Will you be the Noble Knight or Black Knight? The choice is yours in the Code of Chivalry.

Purchasing the Code of Chivalry Bundle automatically unlocks content and allows players to begin completing Quests. These Quests will determine the order in which you unlock content and will progress the story – good or bad.

Find out more about the Code of Chivalry event HERE.

“Dreamhack Valencia is approaching and 4.11 will be the Patch that both the SMITE Pro League and SMITE Console League will be played on. In 4.10, we made targeted adjustments to Cleave characters, Sundering Spear, and minor God and Item balance which were causing problems at high levels of play. We are continuing this level of focused change for 4.11 and are excited to see how the meta continues to evolve in the time leading up to Dreamhack with these changes in place.”

“Aura items have long been staples of Support builds for some time, and with Season 4's introduction of Gauntlet of Thebes, that build become even more prevalent. Gauntlet Of Thebes was very cost efficient in terms of raw survivability, providing both forms of Protections with a high amount of Health, while also sharing those defenses to allies. We are reducing the Health and total amount of Protections provided to bring it more into line with other non-aura options.”

Heartward Amulet is normally paired with Sovereignty, but as a Magical Protection item, it was already more situational than Sovereignty and saw replacements in items like Shogun's Kusari. We are going to watch the strength of other aura and defensive items before making other adjustments.”

“In a previous patch, we adjusted this item to be more weighted on the Passive, allowing for higher Power with less Protections, or vica-versa. This has allowed for players to cheaply gain a large chunk of Power with the utility of Protections in clutch early and mid engagements. We are increasing its cost to better reflect its new strength.”

“Cursed Strength is Fafnir's golden ticket Ability, giving him strong Crowd Control, a powerful Slow and Protection Shred in Dragon-form. We are reducing the Slow from a maximum of 40% to 20% at all ranks. This should lessen his ability to control the enemy team during the later stages of the game, instead relying on his other late game team-oriented tools like Coerce to get the job done.”

“Ganesha's Abilities all provide powerful utility to his team, making him a great Support pick across all skill levels of play. One consistent piece of feedback we received, however, was Dharmic Pillars didn't feel as impactful as it could during most stages of the game. Rather than have the Slow component of this scale to 40% from 20%, it is now 35% at all ranks. Ganesha players can now choose to cage and enemy team and force them into a tough decision or drop the edge on a player, granting a powerful Shred and Slow very early into the game.”

“Nemesis has been a popular pick during this Season in the competitive scene, fulfilling the role of a tank shredder to great effect. However, many who experience Nemesis see her largely as an ultimate bot that doesn't feel counterable. We have plans to look at her a bit more in-depth during the Mid-Season Patch (4.13) but wanted to make a minor adjustment before Dreamhack.

Scales Of Fate is seeing a reduction in the power gained and stolen, lowering the maximum swing in power that can occur when fighting Nemesis. This allows her to continue her role as a tank shredder, but reduces her strength as a duelist.”