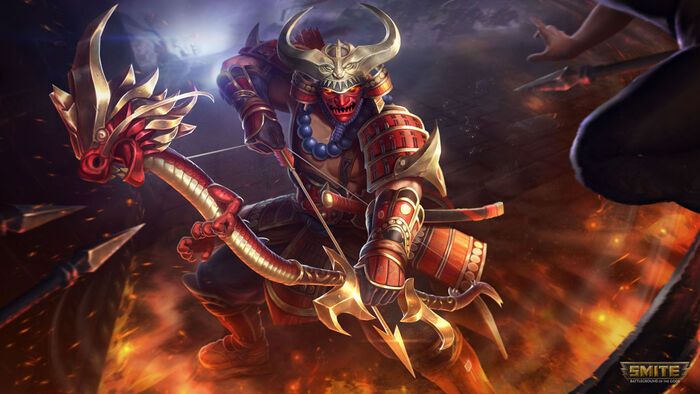 Hachiman grows stronger as he lands his blows. Hitting enemies with Basic Attacks energizes Hachiman, granting him a stack of MP5. Stacks up to 5 times, stacks last 8s.

When Hachiman toggles on this ability, instead of Basic Attacking he fires a series of arrows that do additional damage that falls off at long range. Each hit may trigger item effects for basic attacks, and can critical hit.

Hachiman calls down sacred banners from heaven, damaging all enemies in range, granting himself Attack Speed, and leaving a banner which buffs his and allied Attack Speed while within range.

Hachiman dashes forward, damaging and passing through enemies. Upon reaching his destination, Hachiman swings his blade in a full circle, hitting all enemies in range. If hit by both attacks, enemy Gods are stunned.

Hachiman leaps on his horse and charges forward. While mounted, he is immune to Crowd Control and can aim separately from the direction of his horse. He may fire to launch an arrow at every Enemy God within a cone.

“This year's Odyssey begins in 4.17, and we're going to be releasing awesome Skins and more for the next eight patches! Journey with Athena and Ares as they cover the world in the wake of Zeus's death, based on the SMITE comic universe. Once again players will be able to complete Odyssey Quests and gain Odyssey Levels to move them closer to obtaining the Tier 5 Ullr Skin as the ultimate Odyssey Reward! The items released in 4.17will be discounted until the next patch releases, so be sure to act quickly and save some Gems! For additional details, check out the Odyssey 2018 website and FAQ.”

“Brawler's Beat Stick and Divine Ruin are meant to be powerful items when healers are present. However, Brawler's Beat Stick became a popular pick – even in situations where there was very little or no healing. We are increasing its cost to bring it more inline with other anti-heal items.”

“Bastet's cats can range from being incredibly potent to having no impact. Our main goal is to reduce this variance, especially in the late game. Bastet will now receive a stacking Physical Power buff when her cats are defeated by enemies, giving a nice bonus to her high-scaling abilities.”

“Ever since her rework in 4.1 Hel has been a high performing goddess at all levels of play. In recent patches players have been discovering this strength and utilizing her effectively, pushing her into first pick/first ban in many situations. We are making targeted adjustments to some of her utility but want to keep what has made her successful (such as her safer wave clear). Decay will now better fit the visual explosion FX (and limit Hel's ability to splash damage into an enemy team) while Inspire will give a reduced amount of Movement Speed to allies. SMITE's Lead Designer HirezAjax recently wrote an article highlighting Hel's performance before and after her rework, while giving additional context for the overall goals of her rework. If you are looking to dive deeper into the ideas and stats behind this change we recommend giving it a read over at hirezajax.tumblr.com.”

“In this patch we are adjusting three Warriors: Odin, Ravana, and Sun Wukong. These gods have been overperforming and have limited the diversity of picks within the Solo and Jungle roles. Odin and Ravana were specifically looked at for their strong performance in the Jungle role. All three of these warriors are getting reduced Movement Speed which will impact their ability to play Jungle and will slow down their rotations. They are also receiving specific targeted adjustments to their overall power.

Path to Valhalla allows Odin to gain a large burst of speed and power, even if he is not involved in a fight at that moment. This combined with his high burst potential from an undamaged bird bomb allows him to quickly turn fights. We are reducing the Movement Speed given from Path to Valhalla to limit his ability to rotate to and escape from fights and we are bringing down the absolute top-end damage of Raven Shout to limit how much he can swing a fight in his favor.”

“In addition the movement speed adjustment that Odin and Sun Wukong are also receiving, Ravana is taking some direct nerfs to his ultimate. Mystic Rush was allowing Ravana to dive enemies heavily in the early game and made early attempts to trade with him very difficult. We are reducing the Damage Mitigation buff in the early game to better allow for players to handle Ravana dives, and we are increasing the cooldown to give more room to trade with Ravana while the ability is on cooldown.”

“Sun Wukong's strength comes from his ability to harass and trade often with little fear of retaliation, especially with a tanky cooldown reduction item like Breastplate of Valor. Magic Cudgel and Master's Will are both seeing Cooldown increases which will limit Sun Wukong's ability to constantly pressure his opponents. Sun Wukong will now need to be more careful of when to use these abilities during a fight.”

“Zeus has struggled to compete with other Mages that fill a similar role. We are increasing his base movement speed to help him position himself in teamfights, and rotate to skirmishes that develop.”