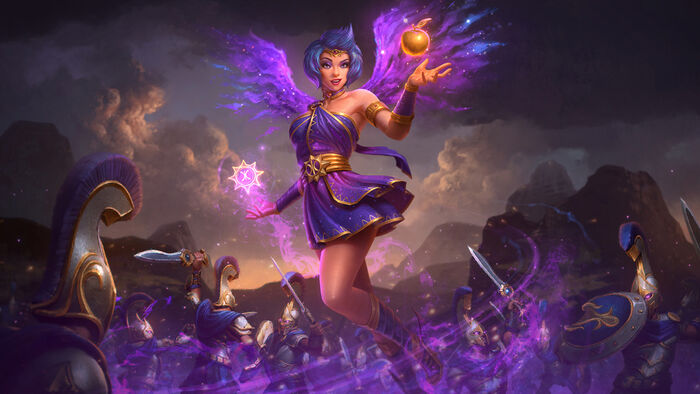 Discordia is constantly comparing herself and her teammates to see who is the best. Whichever god on her team has the top damage dealt to enemy players will receive a Power buff that scales off Discordia's level.

Discordia sends an orb of unruly magic to a location that damages any enemies it hits along the way. At that location it will break down into 6 minor projectiles that fire out in all directions, damaging any enemies hit and bouncing off of walls.

Discordia creates an area of Strife that damages all enemies hit. If 2 or more enemy gods are hit at the same time they will be afflicted by Madness for 1s, forcing them to attack each other for additional damage. The same is true for minions. If only a single target of one type is hit then it becomes Rooted for 1s instead.

Discordia leaps a short distance and then creates an area of confusion where she lands that persists for 5s. While inside the area she becomes stealthed, gains bonus movement speed, and Her 1st and 2nd ability cooldowns are reduced by an additional amount of time every .5s she remains in the area. Attacking from the area will briefly reveal her.

Discordia throws her Golden Apple of Discord that damages and passes through minions and bounces off of walls. If the Apple hits an enemy god it will damage them and force them to hold the Apple. Gods holding the apple will become intolerable, causing them to be Crippled, Intoxicated while they constantly boast. At the end of the duration, the Apple will detonate, dealing damage and spreading the effects to nearby gods.

“The Trickster God, Loki, has kidnapped King Hercules! Journey into the lands of Norse Mythology, combat legendary monsters, and confront Loki in an epic final battle! This new SMITE Adventure is available in 4.21 through 4.24. For more information, check out our Adventure site or FAQ!”

“Blackthorn Hammer has not seen much use since its addition to the game in Patch 4.1. It's stats, Gold, and situational Passive have all felt underwhelming given the wide variety of other items Warriors (and sometimes Assassins) would be interested in. We are lowering the Gold cost on this item and increasing the HP threshold this Passive triggers at. The health this item provides combined with the passive gives players the tools to be hyper aggressive, and use their overall health to be a playmaker.”

“Stone of Fal is a counter item, meant to help players deal with high burst opponents. At 2700, it was often hurting players who built it, even in situations that warranted picking it up. We are reducing the cost of this item to reward players who find the right opportunity to build Stone of Fal.”

“Relic Dagger enables a unique Relic focused playstyle, especially with Support players using teamfight or initiating relics. We are increasing this Health this item provides to better allow Supports to bring this item into their build, giving them appropriate tankiness and utility for the cost.”

“Agni is getting a buff! In metas past, he often served as a mid-tier Mage who wasn't the best or worst pick. In Season 4 however, he has failed to pull himself out of the bottom half of the god pool at any time. Items and meta shifts constantly move Gods balance points, and Agni has suffered from the changes this Season. When used well, his passive contributes a lot of Damage during a game, but requires Basic Attacks to charge it up. Agni's Attack Speed per level was quite low compared to other Mages with Basic Attack Passives, so we hope to speed this up both to match other Mages and help him activate his Passive more often. Rain Fire is also going to be hitting harder and more often. Agni's late game is largely around poking out his enemies while looking for a chance to commit off a Meteor stun. Allowing this to happen more often and be more punishing will give Agni the tool he needs to feel impactful, especially when combined with his passive bonus damage.”

“Da Ji getting some improvements to both her stats and her overall playstyle this patch. Since her release Da Ji has struggled to make her mark as an Assassin in both casual and competitive games. We are focused on changes that better enable her to get into a fight and apply her burns and bleeds. First, Da Ji's Basic Attacks are seeing significant changes. They now are a standard Basic Attack with no unique timing or damage adjustments and have updated animations that better match when she is hitting an enemy. Horrible Burns is also receiving Haste, allowing her to Basic Attack without movement penalty while it is active. Weaving Basic Attacks and Horrible Burns should be smoother with these adjustments. Da Ji also has an interesting playstyle, looking to quickly get into a fight before using Paolao to get above the fight and pick off targets. We are increasing her Base Health to help he get into the thick of a fight while increasing the casting speed of the Paolao chains, allowing her to more consistently hit enemies.”

“Hou Yi is seeing a very targeted adjustment to Ricochet this patch. While he often struggles at most levels of play, his ability to quickly clear the Jungle early has made him a top pick in the Smite Pro League. His power there is limiting Hunter diversity, stagnating the amount of potential strategies that can be used. Ricochet will no longer deal it's bonus damage per ricochet to minions, jungle monsters, or objectives. The bonus damage per ricochet will still apply to gods, but his ability to clear camps early and incredibly quickly will be lowered to give other Hunter and Support combinations a stronger opportunity to answer his level of early clear.”

“The Goddess of Magic is getting a boost to her mid game potential. Circle of Protection is a powerful tool Isis can bring to a fight, but early ranks of this ability are often not rewarding enough to deter opponents from engaging onto her or her team recklessly, especially since Isis lacks the damage to empower her ultimate that early. We are increasing the Base Damage on Circle of Protection but reducing the per-level scaling so it ends at the same strength. Her ultimate will hit harder and be more rewarding when fully empowered, but her late game should remain at the same power it is now.”

“Janus is seeing some changes this patch that are focused on improving his overall performance while reducing some of his most frustrating moments. For the last few years he has always struggled at all levels of play and has gone in and out of SPL viability. His unreliability from Unstable Vortex and the one-shot potential of a cross map snipe is a large reason for this disparity. Unstable Vortex is seeing a damage increase on a single hit, with a reduction to the bonus damage for hitting both orbs. Players will still be rewarded for hitting with both but he should see more reliable success when this situation isn't confirmed. Through Space and Time is also getting a damage buff, but will now scale less as it travels across the map. Players will be more rewarded for using this in more aimed and close scenarios, while being less rewarded for using this to travel across the map and incidentally one-shotting an opponent.”

“Ullr, Da Ji, and Janus have all had similar issues through their lifetime. They have struggled consistently across all levels of play with only situational SPL success and we are looking at issues in their kit that prevent them from being more successful than the bottom of the god pool. Ullr often has the lowest damage stat of all hunters, suffers from Mana issues, and has a few animation/ability issues that we are looking to fix. Bladed Arrow and Thrown Axe are seeing scaling increases to help him keep the pressure on as games move into the late game. Thrown Axe will now also leave Ullr's hand quicker, better matching the current animation. Expose Weakness/Invigorate and Hail of Arrows/Glory Bound are seeing Mana cost reductions, helping Ullr have access to his utility skills more often. Hail of Arrows and Glory Bound are also seeing a few FX and bug fixes. Hail of Arrows' target has improved clarity on both where it is in the world and if a target will be hit by the ability. Wield Axe/Wield Bow is also seeing a decrease to it's cast time, making it match other stance switchers who need to respond to situations quickly like Hel.”