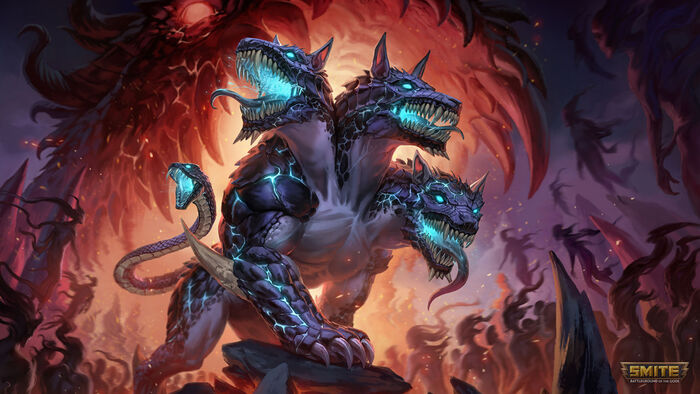 Any time an Enemy God within 40 of Cerberus is healed, that healing is reduced by 20% and Cerberus receives 40% of the heal.

Cerberus's snake tail spits venom that passes through and damages Enemies. If Cerberus's dog heads are Alert, they then also spit venom when the ability is fired. Each head is alerted upon hitting an Enemy with a Basic Attack, and all are alerted after Ghastly Breath. Each projectile that hits the same target deals 20% less damage, but hitting an Enemy with all 4 Stuns them.

Cerberus leaps a short distance forward, dealing damage on impact and severing the souls of Enemies. These souls will not block Cerberus's attacks, and killing the souls heals Cerberus.

Cerberus's haunting wail summons below him the souls of the damned, which then lift all Enemy Gods into the air while stretching the link between their bodies and souls, Damaging them. A short time later, Cerberus uses this link to pull the Enemies to him.

“Anhur has struggled to lane against other hunters due to opponents absorbing his entire waveclear. Targets impaled will now deal damage to targets they pass through, allowing Anhur to have more consistent wave clear. Highly skilled Anhur players can also try for more damage on enemy gods with a well places Impale.”

“Chaac is a Warrior that does ok in a few areas, but often doesn't bring enough to the table to justify picking him over other gods A while back, Rain Dance used to slow Attack Speed on targets caught in this rain which helped him box and gave him better ability to dive the enemy team. We are bringing this back so that he has a specific benefit to picking him against team comps that are reliant on basic attackers.”

“Hun Batz started off Season 4 as a quite popular god, but has dropped off heavily throughout the year. Hun Batz still has many tools to make him a worthwhile pick, like his huge crowd controlling ultimate, but we are looking to increase his strength in a more consistent way. Increasing the damage of his poke ability will achieve this.”

“Terra was an unstoppable force when initially released, providing massive healing, damage, and control to her team. Through many patches we have toned down her strengths to bring her more in line, but this resulted in her feeling underwhelming. We are increasing the potency of the Monolith shatter slow, giving Terra more impact when she aggressively fights into an enemy team.”

“Zhong Kui's basic attack buddy will now always stay by him, even when this skill is on cooldown. Zhong Kui got a large buff this year and now sits in a much better spot than he did before, but time has shown he could use a little more. With a reduced cost and the bonus damage from Book of Demons, Zhong Kui will be a more formidable opponent.”