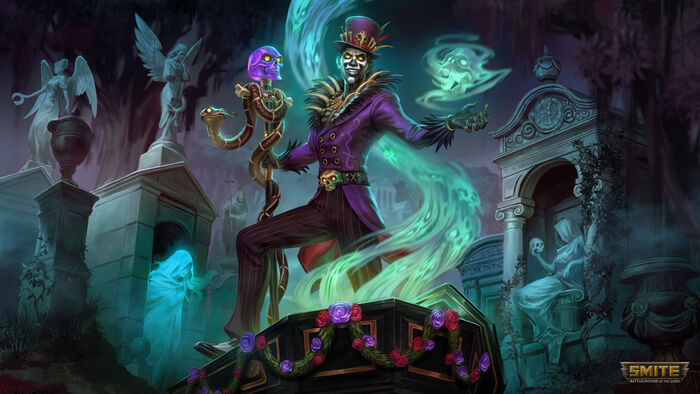 Baron shares Baron's Brew, a powerful restorative chalice, with his allies from the Item Shop. Enemies hit by Baron will have Hysteria applied to them. Baron's abilities interact with Hysteria to provide bonus effects. Targets at Max Hysteria take 25% additional damage from Baron Samedi.

Baron Samedi animates two skulls, both which briefly charge before firing beams of voodoo magic that damages enemies. The beams meet at a crossroads of Baron Samedi's choosing. Enemies hit by both beams take 15% damage on the second hit.

If the enemy god hit is above 30 Hysteria, their Physical Power, Magical Power, and Attack Speed are reduced

Baron Samedi guides restless spirits to the ground and buries them. After a brief delay the ground erupts, damaging enemies standing in the area. If an enemy god is hit, friendly spirits fly the from the area and heal allies near the explosion or by Baron Samedi.

If the enemy god hit is above 30 Hysteria the friendly spirit cleanses slows, makes allies immune to slows, and increases their Movement Speed.

Baron Samedi throws his snake forward, wrapping any enemy god hit and dealing damage every .5s for 4s and slowing them until they are rooted.

If a god hit is above 30 Hysteria, the snake will also lash out at nearby enemy gods who stand too close after 1s. Enemies hit by this are injected with venom that slows them until they are rooted and deals the same damage but instantly rather than over 4s.

Life of the Party

Baron Samedi pulls the souls of the living towards his Coffin, becoming CC Immune and taking 50% reduced damage. Enemy gods within range are pulled towards the Coffin and take damage every .33s. When an enemy god gets too close to the coffin their soul is ripped out, causing them to be stunned, take a large amount of damage based on their total health and gain max Hysteria. This ability persists for 3.5s or until an enemy god is pulled to the coffin.

If targets being pulled are above 30 Hysteria, the pull strength is increased on them.

“The solo lane has been especially interesting in the Summer Split of Season 5. We have seen the rise of Guardians which was followed by the rise of healing Mages, and even a few Assassins. Recent adjustments to make sure Mages and Guardians felt impactful have caused them to overtake solo lane slightly more than intended. This diversity is good but we are barely seeing any Warriors in the solo lane in SPL, so we feel a slight shift back toward them is necessary.

One specific starting build is very good at countering warriors. Mages and Guardians can get Warrior's Blessing, Breastplate, and a Chalice to be especially safe in lane. This starting build was giving too much safety so the cost of Breastplate is being increased. With this change, players will need to reevaluate their solo lane starts.”

“A core theme of this balance patch is bringing more Warriors into viability and bringing more aggression to the solo lane. Gladiator's shield was a must-buy item for most of Season 4 but a few nerfs to protections and the item changes in 5.1 caused it to quickly fall off. We are going to bring this item back up on the power side to make it more attractive to play Physical gods.”

“Healing gods have been growing in popularity and power in the recent few patches. This effect is occurring anywhere from SPL to normal games. To bring these gods down slightly without changing their core identity of healing, we are bringing down the supplemental stats on Rod of Asclepius and Rod of Healing.

These items are quite attractive due to their sheer amount of stats, even when not fully utilizing the Healing bonus. We want to make sure these items are purchased only on gods and players who want to commit heavily to the healer playstyle.”

“Items or abilities that count player damage to reach stacks or goals will be shifted to post mitigation. This is more of a feedback and perception change than a balance change, although it is a nerf. It will be easier for players to visualize how much they are charging these effects up when the counter more closely coincides with the actual damage they are dealing.”

“The final item buff to help out Warriors is Void Shield. This item has fallen off recently but we have seen from past history that the breakpoint where this item becomes OP is very sensitive. We are making two slight adjustments to it to make it more attractive to Warriors, making it feel more closely matched with Void Stone. By reducing the price slightly and increasing the defensive properties of this item, we hope to cement this more as Warrior item and avoid it being a new staple for Assassins.”

“The god of bees has hardly been causing buzz in Season 5. After he dominated the meta in Season 4 he received some nerfs that appeared to be necessary. These nerfs combined with the many meta shifts of a new Season left AMC in a much lower than intended spot. We are reverting one of those nerfs completely, and halfway reverting the other.

We are also making another adjustment to the god. Although it's a nerf we don't expect it to harm him very much. The component of the Bees! Passive that could Disarm enemies was inconsistent and confusing. We are removing this effect entirely along with the buffs he's getting.”

“Aphrodite has become a top pick for the solo lane. Her healing hugely outpaces Guan Yu, Ra, Sylvanus, and Chang'e. Hel is the only one who can come close to her healing numbers. The Magical Power scaling on the Heal of Love Birds is being reduced to bring this into line with other gods. Aphrodite has great potential and has been used in pro game in many different ways. Her Back Off combo with an Assassin can deal insane burst damage and her ultimate can protect an ally from any situation. We like these unique applications but her healing, especially out of combat, was outpacing all of the competition.”

“It's about time Apollo got back on stage playing that beautiful music. This hunter has fallen off heavily over the years. As SMITE's hunter meta has shifted we are rarely seeing Apollo, even with his powerful range of utility effects on his abilities. To further strengthen his utility he is regaining an effect that the he lost long ago. Apollo's Ultimate will once again apply a Knockup to enemies hit by the last damaging pulse of the ability. However, the Knockup's height and direction is being shifted to allow better counterplay and to allow Apollo and his teammates to better synergize with the effect.”

“Awilix and Suku should be a top tier choice against highly mobile teams, but her priority as a counter pick seems to be overshadowed by other Assassins. We are increasing the strafe speed of Awilix while she is riding Suku as a nice QoL buff. This should make her feel more fluid and responsive while she roams and sets up her ganks. We are also decreasing the Cooldown of her Ultimate to play up her role as a counter to leap-heavy squads. This effect is so unique and powerful in SMITE and should remain strong to prevent teams from relying too much on mobility.”

“Khepri continues to be somehow unnoticed in the Guardian roster. Players have learned to adapt to his Ultimate and are countering it more effectively. His recent buffs helped slightly, and we want to continue with some slight buffs to avoid returning to his definitively overpowered previous state. In this patch we will adjust his passive to help it make an impact on his entire team, instead of just one person. We also are adding a new component to Abduct to help him avoid one of his worst weaknesses. Khepri wants to set his team up for kills but can often be instantly bursted down if he manages to Abduct an enemy. These new protections should allow him to be more aggressive with his Crowd Control.”

“Another god who was once controlling the meta has fallen off in a major way. Osiris lost his Death's Toll start and Warriors that rely on Basic Attacks have been getting buffs this season to compensate. Osiris now gets his turn by upping the damage on his low cooldown skillshot. Chaining Sickle Strikes together is a key feature of the god and we want to reward players who can consistently use the ability. The Lord of the Afterlife is also seeing a cooldown decrease on his Ultimate. The complete negation of healing by this ability makes him a great counterpick in a sustain meta.”

“Ra is at the highest point he has ever been. His popularity and performance have both skyrocketed recently in Normal games as well as SPL. The healer meta and his strong objective secure have made him a high priority god. Specifically in the SPL we saw that his Ultimate, which has the shortest cooldown in the game, was allowing him to pressure teams to an unhealthy level. No objective could be taken, no team fight could be started, without first checking the enemy Ra. We are taking Searing Pain and increasing the cooldown slightly to allow more counterplay to Ra's strengths.”

“The Morrigan was shapeshifting all over the Conquest map in Season 4, but with the many changes to the meta she fell out of favor slightly. She can struggle to clear early, but her late-game damage and utility more than makes up for it. What we want to adjust instead is her mobility. The Morrigan played well as a roaming ganker in Season 4, but the larger Map in Season 5 made this harder for her. She is getting movement speed increases across the board on her Confusion ability to bring her back to the battleground.”

“Another Warrior that has been seeing less play this year is Tyr. This Warrior is quite difficult to play and we can see that in the data. His stance changing works differently than other stance changers, and his greatest strength lies in an all-in combo that can be easily negated. To buff Tyr we are introducing an entirely new component to him which adds a lot more flexibility to his kit and adds more playstyle choice. Tyr's Fearless in Guard Stance was a very underwhelming ability, but now it will Disarm opponents and deal slightly more damage. This allows him slow down his lane opponents clear, lets him counter hunter DPS in team fights, and even lets him break enemies' Magi's Cloak bubbles by himself. This added effect should keep Tyr difficult to play, but give him even more ways to succeed when cleverly utilized.”

“Since Xbalanque's Passive change and other adjustments, the god has been performing extremely well and his pick/ban % has increased drastically. We are applying the same fix to his passive as Shaman's Ring, which will slow down his power ramp slightly while also providing much clearer feedback. His Ultimate is also being increased in Cooldown to be consistent with other global Ultimates. This ability might not seem immediately impactful to some as it deals no damage and can be very situational, but the blind is a very powerful effect. The advantage gained over a blinded team can quickly end games and it should have a Cooldown that matches its effect.”