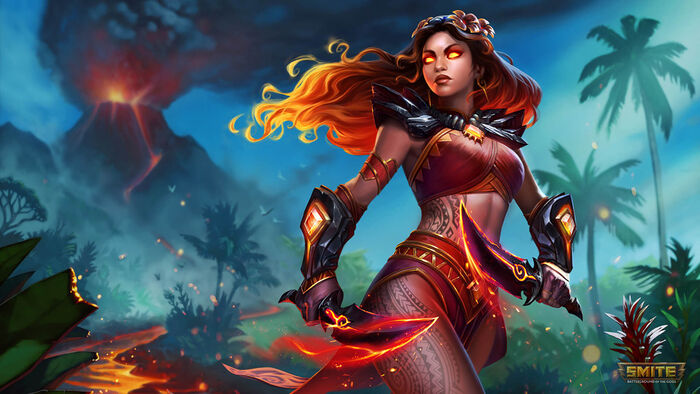 When Pele drops below 50% health her flame is set alight, and she gains increased Physical Power, Lifesteal and Ability Lifesteal. This passive has a 20s cooldown.

Pele flourishes and fires out a magma orb ahead of her in a line. Once the fiery projectile reaches maximum distance it hovers for a brief instant, solidifies, and then returns back in pieces, dealing damage to enemies on the way back. The number of shards returning is dependent on the rank of this ability. Pele has 2 charges of this ability.

Pele fiercely erupts energy into the ground, exploding in an area around her, causing damage and Knockup to all enemies. At ranks 3 and 5 the area expands again at a delay, dealing less damage and a smaller Knockup. Three Exploding circles.

Pele starts to churn the land around her, dealing damage to nearby enemies and giving her constant movement speed while this ability is active. Toggle this ability again to enter an amplified state, expending more fuel but dealing more damage and providing additional movement speed. This ability has no cooldown but uses a fuel gauge and cannot be activated when below 10 fuel.

After a short warm up, Pele dashes forward dealing massive damage and a slow to the first enemy God hit, and dealing additional damage to enemies behind in a cone. For the next 10 seconds or 3 attacks, every time Pele hits an enemy with a basic attack, additional damage is dealt behind the enemy as well.

“Atalanta's Bow has seen a lot of adjustments throughout Season 5. It's core design goal is to give Hunters access to additional Movement Speed. While this item is something Assassins or Warriors could use, they have access to powerful options in the Katana tree. We feel Atalanta's Bow is fairly statted and viable in some situations, even if it has not caught on yet. We are shifting some of the Movement Speed to be available all the time, with less of the weight being on the passive. This tweak should help it be a more consistent Movement Speed option for our Hunters.”

“Lono's mask has been fulfilling its design goal of letting other classes flex into Supports. We have seen one specific case that seems to be the clearly powerful choice for this item: Healing Mages. These mages don't feel the sacrifice in damage as much as other gods because they rely on healing. To even this out across all types of Gods, Lono's mask will now cause the wearer to sacrifice healing done as well as damage done.”

“Achilles had a strong release, using his incredible early game to really bring the pain to his opponents. While his overall performance wasn't stand out, this pressure caused him to be a popular pick and ban in ranked and competitive, so much so that it took multiple nerfs for players to really start opting for different picks. Now that his prevalence has begun to subside we want to shift his power.

We are bringing down his offensive power in the early game with a nerf to Combat Dodge's cooldown and damage, as well as the bonus Radiant Glory brings at rank 1. However, his late game is getting an increase, with a direct buff to his defensive capability and the bonus scaling provides from Radiant Glory. While he will still bring early pressure, it shouldn't be as difficult to manage and his overall performance won't be determined by how hard he carries the first half of the game.”

“We are continuing a pass on shorter gods to make their camera heights match default gods. This can have a significant impact on visibility and feel for these gods. There are still more camera height adjustments to come so this won't be the last patch you see this type of note. Also it should be known that we will not be decreasing the camera height of tall gods. Tall gods need that extra height to make sure they can see the battlefield.”

“The Valkyrie has returned to SMITE in a big way after update 5.13. Her adjusted abilities give players more flexibility than ever and smooth out Freya's power curve. She still seems to feel a bit too much like a burst mage and not enough like a Mage ADC. We are decreasing the late game damage of her AoE burst to reduce this feeling. We are also decreasing her mana cost for using ranged Basic Attacks. This will allow Freya to play like a hunter more often.”

“The Goddess of Winter and her loyal Wolf haven't been making much of a showing lately on the battlefield of the gods. Kaldr has been the target of many nerfs over his lifetime, and how that his damage and tankiness seem to be in good spots, we want to increase his uptime. Kaldr can regenerate HP faster to make sure Skadi players get to use him often. We are also giving Skadi a slight cooldown buff to her primary clear ability to help her early lane phase.”

“SMITE's most difficult goddess has dropped lower than we anticipated. One factor that is limiting her is her ability to more directly compete as a mage during the laning phase. Her early clear being weak was not a specific design choice, but a result of balancing the flexibility she brings to a team. It can be seen now that it was too low and hurt her too much. We are increasing the amount of damage Dark Omen deals to minions by a significant amount to help The Morrigan more closely match the pace of other mid laners.”

“The smith of the gods is getting some much needed upgrades to his forging tools. Backfire will now go through walls, helping this god get more successful hits in the jungle. Also Inferno Cannon will gain a new feature that deals more damage to tanky gods. This ability has always paired well with lockdown but its lack of penetration really holds it back in these scenarios. Vulcan should now become a top pick for his ability to provide consistent follow up damage.”