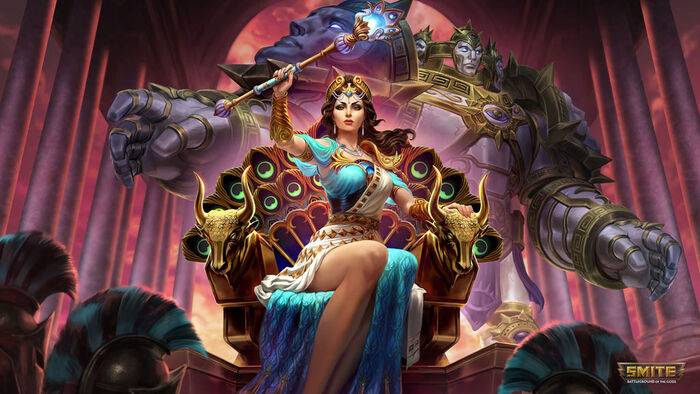 Hera damages enemies in a cone in front of her before opening a portal for Argus to attack through. Enemy minions hit by this cone are knocked into Argus' path. Argus then slams his fists at the target location dealing heavy damage. If both of his fists connects with an enemy, it deals 15% extra damage.

Hera weaves magic in front of her before sending it out. Enemies hit by this ability take damage. If this ability hits a god it causes their form to shift into a monster.

Hera shrouds herself in her divine power, granting her a shield from damage and temporary movement speed that lasts as long as the shield remains. If Argus is active, Argus shines with the same Divine power as Hera, causing him to deal radiant damage and move at an increased rate.

Hera brings Argus crashing down at a location, damaging and knocking up enemies. On landing Argus will attack the nearest target. Hera can control where Argus moves through refiring this ability onto an enemy or if he has a target, to recall him. While recalled Argus will defend Hera and attack anyone that gets close. Argus has a hit chain that starts with a normal basic attack, into a ground circle AoE slowing enemies by 20% for 1s, into a line attack.

“This defensive item provides extreme MP5 and protections for a very low cost. The passive effect that provides percent damage reduction has proven to be too strong for such a low cost. We have seen multiple SPL matches recently where up to 4 copies of this item have been purchased in a single game. This change will make other items more attractive and require players commit more to Oni's “all-in” play style.”

“Amaterasu has become a top pick for the Support role in pro play. Her Aura ability that provides self sustain, movement speed, and power can create big swings in the duo lane. We are taking her power aura down a notch to focus on her utility and give opponents a chance to outclear her.”

“Freya continues to be the top ban in Ranked play and one of the most winning Mages in SPL. Her burst damage has gotten to a place where it can be countered and controlled, but her movement speed remained much higher than other mages due to decisions made long ago. Freya is now at a point where she can still be strong without that extra movement.”

“Golden Blade has taken Mercury from a strong pick to a top pick. He is one of the strongest gods in the game at all levels of play. Even though Golden Blade is enabling his power, we want to be careful adjusting that item. Many off-meta struggling gods are using Golden Blade to reach new levels of success. The item passive was recently brought back with a positive reception. We don't want to hurt all of those other applications just because one god overperforms with the item.

We will be looking at the interactions of Golden Blade and Made You Look in the future, but for now we will be increasing the cooldown of Mercury's primary damaging ability. His clear will still be strong but he will need to pace himself more carefully with this ability. Two seconds on a big damage ability can make a big difference, and should bring Mercury down a notch without limiting the good pool in other places.”