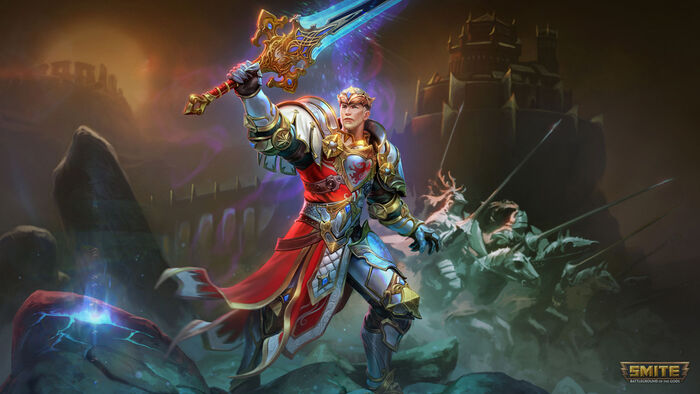 Each ability that damages a god results in a stack of Steadfast, reducing damage taken and increasing energy gain. Each time King Arthur uses an ability he swaps between his Standard and Combo Abilities. All abilities are Instant Cast. Attack Speed and Item Passives do not benefit his Basic Attacks. Attack Speed increases his energy gain.

Standard: King Arthur deals a devastating overhead blow in Melee range that creates a slashing attack that travels forwards. Enemies hit by the Melee strike take 50% of the damage from the Slicing attack.
Combo: King Arthur swipes low, crippling and damaging enemies that are struck.

Standard: King Arthur stomps on the ground with heavy force, causing enemies around him to take damage and become slowed.
Combo: King Arthur charges forward, stopping on first god hit. At the end of the charge King Arthur unleashes an uppercut, knocking up enemies into the air.

Standard: King Arthur unleashes two cleave attacks while charging forward. Enemies hit by a cleave take damage and have their protections reduced.
Combo: King Arthur swings Excalibur around him, charging forward and damaging enemies 5 times before winding up a final strike that deals more damage. King Arthur is immune to Knockup for the duration.

“With the Holidays approaching a lot of our team is taking some much needed time off to spend with friends and family. We will be taking an extra week on the 5.24 patch, which we plan to launch on January 7th.

Since we are taking that extra time, we are even earlier in the development process than a usual patch, and many bugs are still being identified and evaluated. We will list here the most important “known issues” that we are looking into for 5.24, as well as the few fixes we already have planned. This list will expand as we get closer to 5.24.”

Top issues we are aware of and looking into for 5.24 fixes

“Arachne excels at finding isolated prey and shredding them down quickly. While this allows her to perform very well at normal levels of play, high ranked and competitive players are much harder to find alone and away from ally assistance. We want to give her something that will help her ability to team fight as well as her ability to dive the enemy backline.

Night Crawler will now create a large web on the area where Arachne lands, slowing enemies on the field and granting her the same benefits as the Web trail from her Web ability. Enemies will be forced to disperse or fight in Arachne's domain.”

“Hel's Switch Stance is a powerful ability, providing a large amount of passive stats that she shares with her team. Especially at level 5, we want to ensure placing a point into this ability is a powerful option, on par with furthering one of her core abilities. Additionally this will help Hel in both her offensive and support oriented playstyles, without adding additional burst damage or healing that may be frustrating.”

“Susano's Typhoon had a large cast time making it easy to disrupt and forcing Susano players to refire the ability. This created situations where the ability felt clunky and limited Susano's ability to respond to Crowd Control. We are removing the cast time of Typhoon to help alleviate this issues and help his kit flow better between abilities.”

“In Season 5 we have kept a close eye on Thor, giving him some love to help him better compete with the roster of Junglers. While the changes to his 1 have helped, we want to ensure he fills his niche well. Thor brings ranged poke and CC to a fight, and can then tactically choose to engage or flee. No other Assassins have a ranged stun and this advantage should be leveraged by teams as much as possible. By reducing the mana cost and cooldown of Tectonic Rift, he will have more chances to use his unique strength on the battleground.”

“In this patch we wanted to look at Xing Tian, a powerful god that has issues with a few abilities that make him feel underwhelming. Furious Roar brings powerful anti-basic utility, but with a scaling duration it was difficult to ever feel this strength in the laning phase. We have now made the damage duration a consistent 4 seconds and tuned the damage and debuff to make sense for this increased duration at early ranks.

Whirlwind of Rage and Steel that brings a lot to a fight but can suffer from feeling underwhelming. A Whirlwind of Rage and Steel should not stop damaging enemies just because they have cleansed themselves. Players still inside the radius of this ability while he is channeling will take damage. Additionally, Xing Tian will move faster while channeling, allowing him more opportunities to catch unsuspecting enemies and keep up with enemies stuck inside the Whirlwind.”