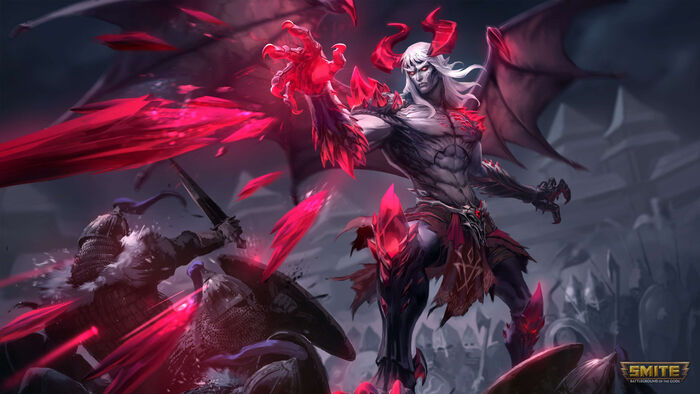 Every successful Basic Attack impales the enemy with a brittle crystal. Upon reaching 3 stacks of Heart of Cold, the enemy explodes for extra damage in an area around them.

Chernobog conjures a large crystal of curses and hurls it at the target location dealing damage on landing. After several seconds the crystalline curses explode dealing damage again and rooting any enemy in the area. The crystal can be detonated early by firing at it with Vicious Barrage.

Active: Chernobog fires an enlarged crystal shard that can pierce enemies and deals damage like a basic attack. This applies a single stack of Heart of Cold to all enemies it passes through and instantly detonates Crystallized Curses. Chernobog gains increased Attack Speed for several seconds after using this ability.

Dash forward with your wings in a shadowy form, dealing damage to enemies on the way and slowing them. If you collide with any wall, you connect with it becoming a shadow on the wall for a few seconds. You are unable to be hit or targeted during this time. You gain a second dash to leave the wall or can cancel the ability to leave early.

During a brief channeling period, Chernobog summons shadows at the location of all enemies that apply a stacking Slow and last for 8s. Chernobog can select any of his shadow clones to fly towards. Once he reaches the location he takes the place of his shadow, refreshing his cooldowns, as well as temporarily obtaining damage mitigations, extra movement speed and every attack triggers Heart of Cold.

“With this update we kick off our Divine Uprising event, where we unveil our upcoming plans to release 3 new pantheons into the game. Join Bellona as she embarks across the world meeting these new gods.

Unlock all of the rewards in a chapter to unlock an exclusive skin! For the Slavic Chapter the ultimate reward will be Galactic Void Chernobog.

Unlock all of the rewards in all three chapters to unlock the limited Tier 5 Divine Dragon Bellona!”

“At the start of Season 5, Warrior's Blessing seemed to pale in comparison to the other Blessings so we brought up its power to make it more attractive. Throughout Season 5 this item has dominated the solo lane, keeping its owner healthy while warriors who choose other options fall behind. After seeing its continued success and power it brings over the course of the game, we are reverting one of the buffs from that patch.”

“Mage itemization underwent many changes at the start of this season. We buffed many items to help balance out the loss of the Rod of Tahuti passive, one of which was Soul Reaver. We are partially reverting this change as mage builds have settled down. This item is intended to have high burst potential and that feature should come at a hefty cost.”

“When purchased, Stone of Fal provides powerful anti-burst defence. However at a high gold cost, a long cooldown on the effect, and a high trigger threshold it became a very risky pickup that could put you behind. We are reworking the passive to trigger most reliably against multiple ability bursts while lowering the cost to make it more affordable as a defensive pickup.”

“Oni Hunter's Garb had an all or nothing passive, making its use cases very restrictive. We have redesigned it to provide smaller amounts of damage mitigation for every enemy god around you up to 3. This lets it reach a similar amount of strength as the old passive but contribute smaller effects with only 1 or 2 enemy gods nearby.”

“The Hero of the Trojan War has been a very popular pick and ban since his ability to join Ranked and SPL matches. His early pressure combined with a strong Crowd Control allows him to quickly overpower opponents, even if his late game isn't at the same level of other picks. We are reducing the spread damage he gets with Shield of Achilles, while reducing the double-tap damage from Combat Dodge. These should help lower the early pressure he brings and allow players to bring him to the mid and late game where his Achilles' Heel really shows.”

“Aphrodite's Kiss requires constant management. Players must balance the ability between kissing their allies to quickly heal or stunning enemies and take an increased cooldown. We want to help Aphrodite players have more control over a fight by allowing them to switch targets much more quickly, allowing Aphrodite to save allies just in time with heals or her ultimate and then quickly follow up by stunning an enemy.”

“Guan Yu's hit chain has some unique animations that feel like they should have specific effects other gods have on theirs. His third hit which is a large swipe will now cleave enemies in the area, and the final hit which is a long forward strike will now have longer attack range. Along with this his passive is getting a tweak, allowing him to maintain maximum stacks as long as he stays in combat. As a god that is known for his extended fighting capability due to his low cooldowns, he now has a passive that matches that playstyle.”

“Khepri has been having a hard time protecting his teammates lately. Solar Flare should be a strong poke and setup crowd control but it struggles to threaten and control enemies. We are bringing up the root duration while also increasing the late game power of this ability, bringing him more inline with other supports.”

“Kuzenbo is seeing a shift to reduce some of the frustration when fighting him (Shell Spikes), while allowing the other abilities of his kit to shine through. Shell Spike's damage reflect is being reduced, but the cooldown reduction per tick of Shell Spikes on NeNe Kappa will also apply to Sumo Slam. His ability to control enemies in a teamfight will be heavily influenced by how many times he can reflect damage. Additionally, Water Bowl is seeing an increase in damage mitigation. Smart Kuzenbo players can maximize this mitigation to really get into the middle of a fight and cause disruption with relative safety.”

“Back in Season 4 Nemesis was adjusted to improve her weak early game and fix her inability to contribute to a fight outside of her ultimate. These changes were successful for her at the time, but with Season 5 the Meta has shifted and Nemesis benefits greatly from it. Fast jungle clear and higher bases damage are even more important than before. We have adjusted her a few times in Season 5, as well as some items she uses, but she still has a strong early presence that translates into a strong late game. We are bringing down the base damage of her primary clear tool, Slice and Dice. This should make her more comparative to other junglers in terms of clear speed while also lowering her mid to late game burst potential.”

“Terra has been rockin' it since the ultimate rework, showing how impactful her aggressive frontline playstyle can be. However, the swing she brings to a teamfight is very difficult to deal with. We are reducing the damage mitigation/amplification swing in half to give teams a strong opportunity to engage against Terra while giving high level players the ability to quickly focus down Monolith. Terra players will have a harder time dancing around Monolith before needing to decide to break it or flee.”

“In our last round of changes we focused on improved clear through Berserker Barrage, but these changes did not help him enough in that department. In most cases, Berserker Barrage is not the correct ability to take for level 1 jungle clear. Mjolnir's Attunement is getting a buff towards minion and jungle camp clear, allowing the return hit to deal more more damage. This makes it clearly the best option for his early jungle pathing.”

“Vamana suffers from very high mana costs, limiting his ability to trade in lane and causing him to mostly focus on wave clear. We want to allow him to have the same flexibility with his abilities as other Warriors do.”

“Xbalanque relied on getting kills to activate his passive which resulted in very high variability and frustration if teammates happened to take the last hit. Xbalanque should have control over his ability to stack his passive through his own play. Dawn Of Night now stacks off Xbalanque's player damage dealt, allowing him to more reliably reach his maximum stacks assuming he can aggress the enemy team successfully. Rising Jaguar is also getting a mana cost reduction in the late game when he wants to spend more mana on Branching Bolas.”