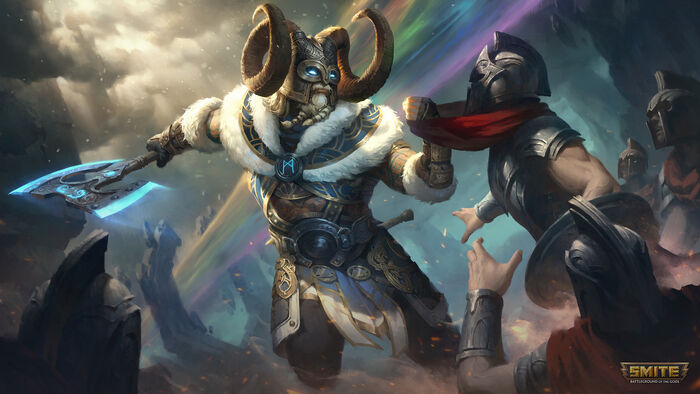 When Heimdallr gains vision of an enemy god he gains Physical Power, up to a maximum of 5 gods. When an enemy god would disappear from vision (including Stealth) Heimdallr continues to see them for 4s. Heimdallr's Critical Strikes only deal 70% bonus damage.

Heimdallr throws his sword, Hofuð, into the air. It shines with brilliant light that reveals enemies within 120 ft. Heimdallr can refire this ability to call the sword down, causing it to fly to the target location and damage enemies.

Heimdallr blows the Gjallarhorn for 2s, causing enemies in front of him to lose Movement and Attack Speed while taking damage every .5s. While blowing his horn Heimdallr is immune to knockups and gains bonus protections. When Heimdallr ends this cast, either through cancelling it himself or after 2s, he raises the Gjallarhorn for a final blast. This blast damages enemies and knocks them away from Heimdallr.

Heimdallr manifests a fragment of the Bifrost at his target location. When two fragments are placed they become linked, allowing Heimdallr to traverse the Bifrost. The greater the distance between the fragments the longer it takes to begin traversing and the longer it takes for it to be usable again. If Heimdallr places a third fragment down, the oldest fragment vanishes. Enemies that walk between two fragments are revealed to Heimdallr.

Heimdallr charges forward, axe ready. If Heimdallr hits an enemy god he stuns them before unleashing a devastating swing of his axe, launching his target into the sky. A Bifrost portal appears and Heimdallr sends the launched foe through the realms of Muspelheim and Niflheim before returning them back to the battleground at a random location in front of him. Muspelheim burns the enemy every .5s for 1.5s while Niflheim slows the enemy for 2.5s.

“This item has single handedly allowed guardians like Jormungandr to dominate the solo lane. The combined stats of this item plus the power reduction aura makes it so that enemy warriors or ganking assassins do very little damage to the target.”

“This underworld creature has been underappreciated most of this year. Camazotz had a brief showing in the worlds placements as a King Arthur counter, but aside from that this god has rarely been seen in any level of play. Camazotz is seeing some big buffs this patch to focus on his primary design feature: lifesteal. His passive lifesteal is being increased on both abilities where it can be obtained, and his bonus healing is rising to prevent him from being easily countered by anti-heals. Finally, his leap range is being increased to closer to the usual distance to help him chase or escape like the true assassin he is!”

“Many players have claimed this destroyer of gods is unbeatable in the solo lane. Jormungandr's win rate doesn't necessarily point to him being OP, but his pick rate is through the roof and a large amount of solo laners struggle to out lane him. We are increasing the damage Jorm takes while debuffed from his passive to help players pick more specific counters to the big snake. He will also be heavily affected by the Jade Emperor's Helm change.”

“A mighty storm indeed. After his recent buffs Kukulkan's metrics skyrocketed to be pretty clearly the winningest god in all of SMITE, across all game modes and skill levels. These buffs overperformed our expectations, so we are toning him back down slightly. Both of these changes target the exact same things we buffed, and partially revert them. This should put Kukulkan is a nice spot in between these two balance points.”

“Mage ADCs have created some interesting balance situations throughout Season 6. Olorun has been in a relatively good spot since his launch, but has risen to a slightly dangerous level recently. His early game is intended to be a bit slower to even out his devastating late game. Olorun has unique power scaling on basic attacks for Mages so he highly benefits from Base Power. This is being toned down to make Olorun's early game less threatening, but not return it to his original state where it was nonexistent.”

“This hyper carry can output an insane amount of late game damage. This god was a popular pick in the placement stages of worlds and often was the game changer for his team. Set is a high skill god that does not excel in all places, so we are applying a rather small nerf to him just to mitigate his max damage potential.”

“This goddess has launched at quite a low balance point yes it's true! Yemoja is one of the lowest win-rate gods across all game modes and skill levels. Through our usual process we focused on gathering data and addressing quality of life concerns and bugs instead of quickly buffing underperforming launches. This has been our strategy all year and its led to very positive community feedback. However, now that we have enough data we have decided the goddess of rivers really does need some changes.

One of the primary dislikes about Yemoja was her build paths. Her passive forced builds to be very constrained, so 2 of her 3 Bonus Omi are being shifted to be earned through level, while only 1 requires a mana item to be built. Another issue we noticed was that players were rarely making contact with her abilities. Her offensive abilities have strange shapes and scaling sizes which makes them especially difficult to land, so both forms of ability 1 are seeing slight increases. Her healing was also lower than expected for a Goddess designed to play that role, so this is being slightly increased as well.”