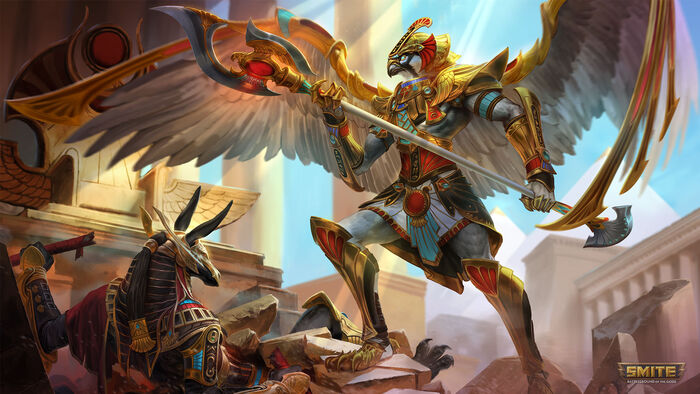 Each time Horus is damaged by an enemy god, Horus gains a stack of Resolute. If Set is the god damaging Horus, Horus gains 2 stacks. Each stack increases Horus' Protections and CCR. Resolute stacks to a max count of 10 for 3s. When Resolute fades, Horus is healed based on the amount of stacks.

Horus uses his wings to create an updraft around himself, knocking nearby enemies into the air. Using the currents from the updraft, Horus' next Basic Attack within 5s will create a gust of wind that travels forward, damaging enemies and slowing them for 2.5s. Enemies that are knocked up when hit take bonus damage.

Horus dashes forward a short distance, ready to strike with his weapon. If Horus hits a god he stops and stuns the god for 1.25s. He will then wind up a heavy cleave. Enemies hit have their Protections reduced for 3s.

Horus rushes to the aid of an ally. After selecting an ally, Horus will fly to their location before descending. Upon landing, the selected ally and all nearby allies have their health restored and gain protections for 3s.

Horus sends a mirror image of himself into the sky that scouts for a location to fly to. Upon selecting a ground location, Horus will begin to channel for 2s. Any ally near Horus after these 2 seconds are flown to the location Horus' image chose. Horus and his allies land with such force, enemies take damage and are knocked away from the landing location. Horus and his allies gain a protective shield upon landing. 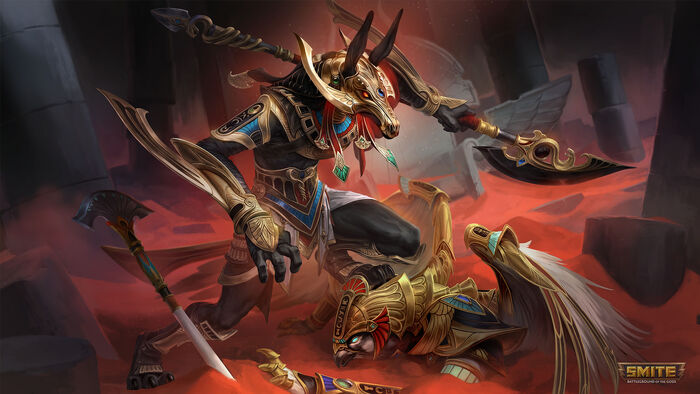 Each time Set damages an enemy, Set gains a stack of Relentless. If Horus is the enemy damages, Set gains 2 stacks. Each stack increases Set's Attack Speed. Relentless stacks to a max count of 10 for 3s. While Kingslayer is active, Relentless has no maximum stack count.

Set amasses his hatred, throwing it forward and damaging enemies caught in its path. Set's spawns are commanded when Set fires this attack, dashing towards a location Set determines. Enemies hit by either Skewer or a Spawns dash take damage and are slowed for 3s. Any dash after the first will deal 40% damage.

Set conjures a spawn of himself made of sand. These spawns will stand where summoned and attack nearby enemies. Set can have up to 2 charges of this ability, allowing him to conjure spawns in quick succession. Set can interact with these spawns with his other abilities, commanding them to attack or teleporting to them. Set can only have 8 spawns at any given time.

Set conjures a Sandstorm around him, protecting him from Physical Damage and causing him to be immune to Slows. Enemies near Set are damaged every .4s for 6s and have their vision obscured by the sands. If Set is targeting a spawn when this ability is cast, he will immediately teleport to the spawn. Otherwise, he can reactivate this ability to teleport. Set can only teleport once per Sandstorm.

Set enrages, channeling his rage towards his enemies. Each time Set damages a god they gain a Mark of Set. At 4 Marks the target erupts. Enemies take a burst of damage while Set becomes empowered, restoring Health and immediately gaining a charge of Spawn of Set. Excess charges are immediately consumed, causing a Spawn to appear near Set.

*These dates are tentative and subject to change.

“The New Assault map has brought a beautiful art set to Asgard, but we saw a lot of feedback about the new gameplay mechanics. The Vital orbs create a lot of fun moments and promote aggressive gameplay, but the amount of impact they had on a match was too high. We are decreased the amount of Health and Mana they restore as well as drastically slowing down their respawn timer to ensure that the way you play your god is still the primary key to victory.”

“The updated Hunter bridge items from T2 to T3 had some exciting results. Hunters have more build variety than ever and are also feeling more impactful at earlier stages in the game. We did see one break case where Hunters could rush Ichaival and then win their lane handily. We are increasing it's cost to slow this strategy down and help make sure build diversity stays strong at all parts of the game.”

“This hybrid item has found a whole new life since its buffs at the start of Season 6. It brings an interesting effect to the Physical gods but currently been performing too well outside of its intended classes. We are happy to see the item being picked up on Assassins and Hunters, as well as the more expected Warriors, but there is always danger when DPS classes become too tanky. We are adjusting this item to keep its appeal to Solo Laners, but decrease its allure to Hunters and Junglers.”

“Blackthorn Hammer has become too cost effective for its price. The amount of Health provided, especially early, made this item difficult to pass up and allowed many gods to become tanky with minimal investment. We are lowering the Health provided to ensure it doesn't overshadow and stagnate builds.”

“At the end of Season 5 we saw the rise of Bakasura, and now through Season 6 the basic attack Assassins have reigned supreme. Even after some Bakasura nerfs, He and Kali have dominated the SPL, and Arachne has climbed to the most winningest god in the game in many metrics (believe it or not). To take these Junglers down a notch we are nerfing their key item a small amount. Hopefully this will promote a wider variety of gods in the Season 6 Jungle.”

“As we continue to look for quality of life improvements and ways to polish up old gods, we have updated the targeting elements on abilities like Bastet's Declaw. This ability fires a line shot projectile but it detonates into a circle that wasn't previously conveyed. This will now be shown clearly, and similar treatments will be applied to abilities on Kukulkan and Scylla.”

“Season 6 has progressed with many changes to the Duo Lane, but Ganesh has failed to find a spot in the meta. He is receiving a few different targeted adjustments to help him feel more impactful in a few different ways. The power buff from Turn of Fate is an interesting effect, but the duration being so short made it hard to make use of the buff. Ohm often caused confusion, where players often expected a protections buff to apply to all types of damage, yet Ohm only provided physical protections. Finally, Remove Obstacles is a narrow skill shot, and its damage is being increased to make sure it feels rewarding to hit.”

“The Ricochet masters is receiving a major quality of life buff this patch to make his kit feel more fluid. Hou Yi will now longer be rooted while firing his ultimate, allowing him to keep moving and rotating while this ability deploys. This will give Hou Yi more ways to follow up his Ultimate.”

“Izanami can clear a wave faster than nearly every other hunter, yet her Conquest viability has still been quite low. We are making Izanami more reliable across multiple aspects of her kit. She won't need to be at such a low HP % to gain full benefits from her passive, her CC will be more consistent, and most importantly, her movement ability will feel much more fluid! This should make her feel a lot better without the risk of overpowering the goddess.”

“The World Serpent has had a HUGE impact on the battleground. As the biggest god in the game he feels very different at the most core level. All our statistics and most community feedback show the god as slightly underpowered. He will be receiving some slight buffs and one large quality of life change. We want to make sure he feels good to play, without overdoing it, as many high level players do feel like he has strong potential in SPL and high ranks.

Jorm's basic attack damage is being increased to help him focus on one of his main strengths as a good, early game wave clear and pressure. His interaction between his abilities and Venomous Clouds is being adjusted to punish him less for proper combos. And finally, he is going to be allowed to refire his Bellow if it becomes interrupted. This ability will no longer give him a buff while firing, which makes the refiring consistent with other god abilities.”

“Excalibur has continued to slay gods left and right, especially at the highest levels of play. King Arthur's Ultimate was designed to reward the Arthur player for building energy quickly, and to deal consistent damage to tanky and squishy targets, but it appears that this ability is still lacking in counterplay. This ability can also be escaped, even once the enemy is caught in Arthur's slashes, but the damage was too stacked onto the end of the ability, which is taken even when cleansed. These changes will shift the damage so that players who escape the ultimate will take far less damage than before, and with True Damage changing to Physical Damage will also decrease the total damage of the ability. This should make it easier to fight against King Arthur.”