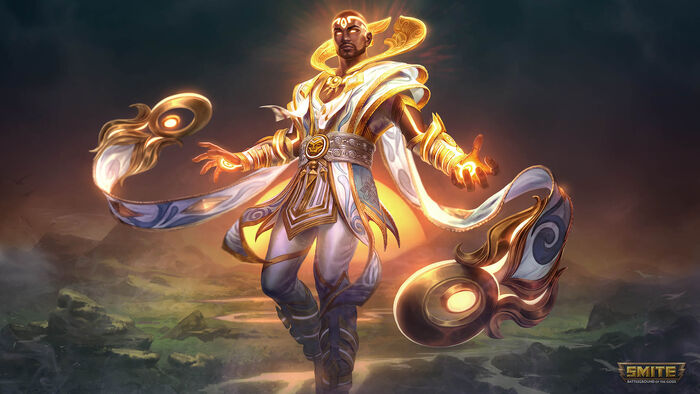 Olorun charges an orb of pure energy for up to 2s before firing it in front of him. The longer he charges the farther the projectile goes, passing through and damaging Enemy minions but stopping on colliding with Enemy gods. This ability can Critically Hit and can provide stacks of Overflowing Divinity.

Olorun gains amplified Attack Speed. Every successful attack on an Enemy during the buff provides his inner Sun with energy, to a cap of 20 stacks. During the buff or for 4s after, Olorun can refire this ability to conjure the Sun to damage Enemies in an area. The Sun emits projectiles faster and more randomly with higher ammo. Hitting the same Enemy deals 10% less damage each time, to a minimum of 80% reduction.

Olorun expends the light within himself knocking back and damaging nearby Enemies as well as slowing them for 2s. Allies bathed in the light gain a heal over time that ticks every second for 5s. For every ally healed, Olorun gains Physical and Magical protections.

Olorun brings forth Olodumare and Olofi who travel outwards, creating a large area of divine energy that distorts the flow of time within. All Enemies caught in the area are negatively affected by the time dilation, attacking, casting and even animating more slowly. Olorun himself benefits from the Sanctified Field in a similar way. The strength of the divine field also impacts the effect of buffs, debuffs, projectiles and deployables.

“Towards the end of last year, we made a decision to shift more of our attention into raising the bar on our skin deliverables. We wanted to push ourselves even harder to create amazing content that we know our players love. This included more special animations and tackling ambitious concepts that we previously would have thought were impossible. Part of that decision included a shift in resources, which meant that we would no longer be supporting the End of Match Lobby animations like you were accustomed to or creating new card art for our color change skins.

We heard your feedback and, starting with this release, we will return to creating match lobby animations and color change card art going forward. We know that we have missed a few releases and it's going to take a decent amount of work, but the team is committed to revisiting that skipped content and giving each of them a custom animation or changing the card art, where appropriate. Catching up will take some extra time so please be patient through the next couple of releases.”

“Odysseus' Bow has become a prevalent force in Hunter builds. A large boost in Attack Speed combined with immediate damage makes this a strong rush option that has become the go to choice for most Hunters. To ensure this isn't pushing out other starts and item variety we are lowering the Base Damage, making this item rely more on its scaling and lowering its immediate impact.”

“Malice encourages a unique play style focused on weaving Abilities and Critical Strikes to gain a benefit. The cost of Malice as well as the strength of the benefit made it difficult to really go for this style of play over the more traditional builds. We are lowering the cost and upping the cooldown reduction to make this more comparable to other build choices.”

“Doom Orb is a pricey item. Movement Speed is a potent effect, and an item that could provide this with a large amount of power was a scary but exciting item going into Season 6. At 3200 gold however, the item was higher in cost than luxury items like Rod of Tahuti and Soul Reaver. We are lowering the cost to make it as affordable as other Mage choices.”

“Gem of Isolation is a potent and frustrating item. Giving mages access to some self peel and setup is important to have, but the counterplay opportunity for this item is limited. We are adjusting the slow potency and duration to give players more opportunity to play around the slowing effect.”

“Achilles has recently undergone some large adjustments. His top end performance was limiting god diversity and his Basic Attacks did not visually match his extended range. We were watching him carefully to see how much of an effect these changes had and he ended up dropping heavily. We want to find the proper balance point between his previous strength and his current performance. To do this we are bringing up his overall clear pressure by increasing the ranged power of Shield of Achilles, while giving him more late game tanking potential through his armored passive.”

“Season 6 has progressed with many changes to the Duo Lane, but Ganesh has failed to find a spot in the meta. He is receiving a few different targeted adjustments to help him feel more impactful in a few different ways. The power buff from Turn of Fate is an interesting effect, but the duration being so short made it hard to make use of the buff. Ohm often caused confusion, where players often expected a protections buff to apply to all types of damage, yet Ohm only provided physical protections. Finally, Remove Obstacles is a narrow skill shot, and its damage is being increased to make sure it feels rewarding to hit.”

“In this patch we are adjusting some Guardians who have been sitting low in performance for some time. Athena has been a potent pick in previous seasons, but has been lackluster for Season 6. Rather than further increasing her strengths (looking at you, Confound) we are bringing up her base capabilities of her other abilities. Shield Wall will get more damage on the front, while dealing the same damage overall making it more useful without needing to combine it with Confound. Preemptive Strike will now always slow for its full duration, giving more offensive potential and control early on.”

“Cerberus can be a powerhouse in most modes, but in Conquest he has struggled to be a successful frontline bruiser and guardian. We are increasing the reward Cerberus receives for aggressively devouring god's souls as well as making it easier to wolf em down. In addition, we are giving him access to his ultimate more often during the early stages of the game, while making it match the frequency of other AoE teamfight ultimates in the late game.”

“Cu Chulainn recently got some love with bug fixes. We have watched his overall performance and he has improved; which is great! However, he has struggled to compete with other Warriors and has fallen out of favor across the board. The bug fixing improvements are awesome, but we feel he needs one more adjustment to really put him at the right spot. Increased scaling on Barbed Spear promotes his mid and late game fighting potential without increasing his already strong early game.”

“He Bo has risen the tides of the SPL, showing himself to be a staple of the competitive scene and high level ranked. Atlas of the Yellow River provides a large movement speed swing while Water Cannon brings consistent and high damage, allowing him to threaten kills easily. We are reducing both of these aspects, requiring He Bo to commit more and put himself more at risk to make similar plays.”

“Horus & Set has been out for some time now and have undergone fixes from their release. Everyone has been having a blast with them and have been discussing their balance state on all channels. While most feel they are balanced, or have concerns about what they can do in skilled hands, we feel they could use slight buffs in key areas to ensure they feel good to play while not over buffing them. Horus specifically struggles from very high cooldowns in the early game, limiting his ability to help his carry in a reliable way. We want to alleviate this while not boosting his late game lockdown, so we are lowering the cooldown early but having it scale to the same amount. We are excited to see how Horus will shake up the competitive scene and their tactics in the weeks to come!”

“The World Serpent has continued to make a big impression in SMITE. His high damage and pressure has pushed him to be a powerful threat, becoming a common pick at the competitive level and seeing success across the board. Our recent changes focused on ensuring his unique aspects felt threatening, so in this patch we are focused on bringing his overall pressure down. Consuming Bellow provides heavy burst that is difficult to deal with up through the mid game. We are lowering the base damage to give enemies a chance to fight back against the damage.”

“Khepri is another guardian who has been strong, but has struggled in the recent Season. We want Khepri to focus on contributing more over the course of a fight more often, rather than relying on Scarab's Blessing too heavily. Rising Dawn will deal slightly more base damage, while Solar Flare will allow Khepri to bring some crowd control more often.”

“Set is similar to Horus, underperforming in key aspects with a community concern on them being over buffed. For Set, we feel his damage and mobility are appropriate when players have invested the time to learning his mechanics. We are increase focused on his Passive and Ultimate, and ensuring players have a smooth experience with both. Relentless is difficult to maintain, even during an active fight, while his Ultimate locked him out of abilities for a significant amount of time, more than his animation conveyed. These combinations can feel restrictive and limiting when Set is all about unleashing his rage. These changes should better represent this feeling and make his gameplay smoother.”

“Ymir is the last, but certainly not the least, Guardian on this list. The Frost Giant is struggling to bring the level of control needed to compete with other guardians. Frost Breath has a significant cooldown, limiting his access to reliable control. We are lowering the cooldown, allowing him to freeze the opposition and shatter through the front lines.”