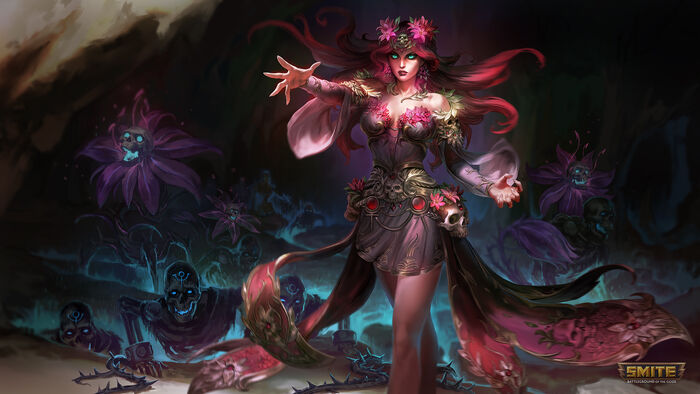 Persephone gains Pomegranate Seeds when her Harvest plants wither. If she has more than 25 Seeds she can spend these to resist death, continuing to fight for 8s but dealing 50% reduced damage. Additional Seeds are sold when she enters the fountain for 3 gold a Seed. Persephone can hold 100 Seeds.

Persephone's Basic Attacks have an AoE upon hitting a target that activates nearby Harvest Plants.

Persephone calls forth a skeletal warrior of the underworld. This warrior charges forward 35 units or until it comes into contact with a god. It charges with such force that when it stops it topples, sending bones flying forward and damaging enemies in its path. The skull from this warrior flies forward and becomes a Harvest Skull when it lands.

Persephone places a Skull on the ground (max 10) and activates them with Basic Attacks. She stores up to 6 Skulls. When activated it heals Persephone. After 4s it turns into a Sprout that explodes, damaging and slowing enemies. After 24s it turns into a Flower that chases down enemies for 3s before biting them. Enemies recently hit by Harvest take reduced damage from additional hits stacking 3 times. After activation or 120s they wither.

Persephone floods the ground around her with life giving energy that propels her from the ground directly forwards or backwards; based on the direction she is moving. Harvest plants inside the area immediately grow to their next stage and activate. After using this ability the next Harvest cast is pre-germinated and spawns as a Sprout.

Persephone conjures a mass of Entrapping Vines that she throws forwards, Entrapping the first enemy god or wall it touches. Entrapped gods are crippled, rooted, and have reduced Attack Speed. Binding Vines then spawn from the Entrapped target that seek nearby enemy gods. Upon finding an enemy god it Binds them, crippling them and preventing them from moving away. Entrapping Vines are destroyed if hit by 5 Basic Attacks, ending all effects.

“The Arthurian Items added a unique gameplay twist to SMITE in the Mid Season Update. After a few weeks of data we can clearly see which of these items are over-performing or under-performing. Of course, some of them are especially strong or weak on certain gods, but that's part of what makes them so interesting.

Arondight was clearly the weakest of these items. It had the lowest purchase rate and player feedback was unanimous in that the stats did not match the cost. Arondight is being given more physical power to help Assassins scale into the late game and make sure this item is worth the purchase.

It should be noted that Staff of Myrddin is receiving no changes in this Update. This item was the most controversial of the new items and could use more data and feedback before its point of balance is determined. Our stats are showing that the item is more likely to need buffs rather than nerfs, but we feel that the community would still mostly disagree with that. We will revisit it in another patch.”

“Fail-not indeed. This item succeeded in many ways, with very strong data and player feedback. A key interaction is being fixed to make Fail-not apply only to enemy gods, and it is seeing a small stat reduction to help bring it down to a more normal stat efficiency for the current price.”

“Pridwen is the cheapest Arthurian item and also the easiest to use, which resulted in it having a massively high purchase count with a strong win rate to match. This item is seeing a rather significant nerf to ensure that it works better on true tank classes and not as a one-of protection item.”

“The rise of mage ADCs has shown a few items to be more stat efficient than is healthy for the game. This item allowed Mage ADCs as well as traditional Mages to get a good bit of offensive stats while also making them especially hard to gank. This reduction should help junglers and hunters alike.”

“In this update we looked at a series of movement speed items. These items were showing steadily increasing popularity and win rate, as well as causing a good amount of community discussion. Letting all characters in SMITE move too quickly is a large risk to the game. It results in less kills and frustratingly evasive gameplay scenarios. We are looking at many of the items that provide movement speed and removing it wherever possible, then applying increases on other stats of those items. Some items that are used by classes who need movement speed, like Assassin items, are only seeing small reductions instead of big shifts.”

“This item is probably the most core ring to Mage ADCs. A source of penetration (Magical Protection reduction) is essential to their damage output. This item is seeing a power increase to offset its loss of movement speed. Power is equally important to Mage ADCs and tends to be lacking in true ADC builds.”

“Telkhines has a more luxury cost, so in losing its movement speed we chose to adjust its unique passive. Increasing the scaling on this passive ability should give Mage ADCs a bit boost to their basic attack damage if they choose to itemize into it.”

“Shaman's Ring is more focused toward non-mage ADCs within the ring tree. This items stats are being adjusted to fit those goals. Its seeing slight cost and power adjustments, as well as an increase to the duration of the passive. However, the biggest change is the addition of CDR. This stat will synergize well with an item that causes abilities to mark targets.”

Decrease Movement Speed from 8% to 5%.

“The tankiest sword in the katana tree certainly makes the worst case for bonus movement speed. We are focusing towards its Warrior style by replacing the lost movement speed with more Health.”

“This katana is contributing toward the over-performance of basic attack focuses Assassins. They have dominated the meta for most of the season, and although Hastened Katana is not seeing adjustment, Stone Cutting Sword is. Hastened Katana is core to an entire playstyle, while Stone Cutting just applies a strong stat efficiency to that play style.”

“Meme or not, this item provides a lot of movement speed with a seemingly high risk. After seeing the live results we determined that the risk was not high enough. Rather than reduce the movement speed we have chosen to double down on the items give and take nature. Bumba's Mask will continue to be one of the strongest sources of movement speed, but it will not come at a greater cost to your other stats.”

“Anubis is a unique mage, focusing on high risk and high reward positioning. We are increasing his Base Health Pool while lowering the cooldown on Grasping Hands. Having more options besides directly engaging with Plague of Locust with more survivability to go forwards should help balance the risk reward playstyle he is accustomed to.”

“Arachne has been crawling up the ban rate over the last season. Someone from a year ago would laugh at this adjustment, but she has become a serious contender that nobody is taking lightly. Her metrics (play count, ban count, win rate) at high MMR is far above others, not just in her class but across the board. Her ability to chase down kills early and sustain in boxing matches makes her a difficult opponent to fight against. We are targeting both of these aspects by lowering the healing from Venomous Bite and the slow applied from Web. Arachne will still excel are wrapping up her opponents, but they now stand a better fighting chance.”

“Chiron brings strong abilities to the table, but as a Hunter he lacks enough late scaling oomph and utility. While he shouldn't compete directly with a Vengeful Assault Artemis, a boost to even the difference will go a long way in helping him feel more impactful. Masterful Shot will further highlight his ability utility and help him land those crucial Basic Attacks.”

“Even time is slowing down this patch. Chronos has risen to be a powerful contender this Season, even with some of his core items being adjusted. Accelerate's movement speed makes him difficult to trade favorably against, creating opportunities where he can run you down with little chance of putting himself in danger. By reducing this, in conjunction with the Ring trees speed removal, Chronos players will need to be more tactical lest have their time alive cut short.”

“The Queen of the Gods is not going to sit idly by as a new queen enters the fray. Hera has moments of strength throughout the game but her early game is inconsistent. Polymorph's early damage is being increased to assist in both clear and harassment of other Gods.”

“The Goddess of Magic has seen a rise since the Mid Season update. She received a large list of direct buffs, Quality of Life Improvements and shifts that have really pushed her into the spotlight. In this update we are reducing Circle of Protection's mitigations to be in between her previous and new state. While this is more minor we want to make sure players have the opportunity to learn to play with and against the new Isis before looking at further changes.”

“Janus is a unique case of very difficult to master, both for the player using Janus but also for his team to follow up with. While we have accepted this will cause his win rate to be lower than most gods, he is looking especially low. Ideally those who have practiced sufficiently will still find a use for him. Since our last nerf he has seen very little high level play or success. We are partially reverting the last nerf, giving him access to slightly better mid pressure and farming opportunities.”

“Jormungandr is receiving a bug fix this patch. Consuming Bellow was not properly doing the math on its scaling per pool consumed, making him deal less damage than the tooltip would describe. We have fixed the bug and adjusted his values to keep them as close to the same as possible and not impact his current state of balance.”

“Olorun is designed to be a hunter, through and through. We are updating his Base Health to be in-line with the Hunter Class rather than the Mage class he is in. Additionally, his abilities are intended to fill in his damage early on until his Basic Attacks successfully take over like traditional Hunters. Focused Light is gaining base power to better serve that purpose.”