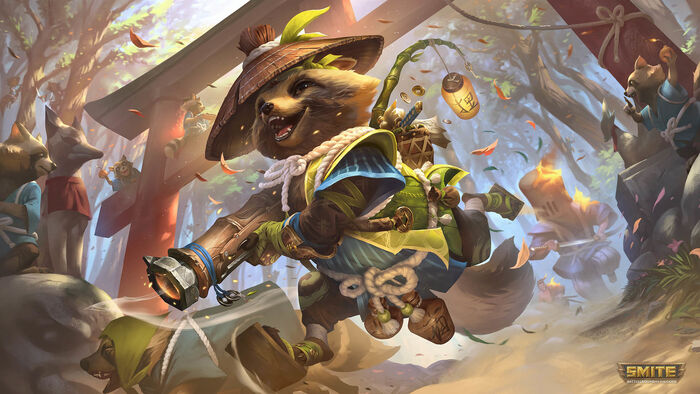 Welcome to the SMITE Friends event! This event celebrates SMITE’s many friendships, featuring our brand new besties: Ymir and Danzaburo, the most dynamic duo out there! This event will have 6 purchasable Exclusive Skins in total with 2 Skins releasing every 2 weeks. Each Skin will have an initial discount of 25% for that release only. Purchase all 6 Skins to unlock the Unlimited Phoenix Fury Kukulkan Skin!

When purchasing a Smite Friends event Skin you will also receive a Gift Token of a certain gift type (Emote, Voice Pack, Tier 2 Skin, or Awesome Gift). Gift Tokens allow you to send a gift to a friend on your friends list, in the gift store, or to maybe make a new friend by giving a gift from the end of match lobby to a stellar teammate! Send your friends gifts this season and spread the joy of friendship!

With SWC and Season 8 on the horizon, we are happy to keep all Items in their current states.

Unlike items, there are a few gods we want to take the edge off before the SWC. Ra, Erlang Shen, Persephone, Yemoja, Sobek, and Set are all high contenders that have either not been nerfed recently or still need a slight nerf. The nerfs may look light in some cases but our goal isn’t to remove these gods from competitive play but to bring them more into line with more with the other highly contested gods. We are also bringing in a few buffs for everyone else! The gods being buffed are either in ways that we think will feel better in the long term or pose low risk to the Worlds stage. We look forward to Worlds and of course Season 8 which is bound to bring some spicy changes!

At one point AMC was the King Bee, but oh how the mighty have fallen. We are reverting a nerf that Ah Muzen Cab received when he was a top pick to bring him closer to the rest of the hunter meta in todays SMITE scene.

Another one that people have been asking for nonstop: Ah Puch! This god is in a difficult balance state because he tends to be one of the strongest performers in non-Conquest modes. We have forever said that its ok for some gods to not be SPL Conquest viable as long as they have strong dedicated players across the game, and Ah Puch falls into that spot. We are giving him some small buffs to hopefully help out his Conquest game by decreasing the chances he runs out of mana. We will keep a close eye on this god and potentially plan some bigger changes in Season 8.

The Dragon King briefly showed up during the peak of the Hecate meta, but then disappeared as quickly as he had risen up. Ao Kuang’s passive rewards him for timing his engagements in between jungle rotations, but the current value was simply too slow to be reasonably stacked. We are speeding that up while also reverting a nerf to dragon call which brings back his ability to opt into basic attack focused builds.

Apollo finally saw his play during the SPL and it was So Beautiful. In celebration (and to help him not be a single pick) we are boosting So Beautiful’s base damage. This ability is a true straightforward damage ability and should shine as such.

The Goddess of the Hunt continues to inspire heating debates in the SMITE community. She tends to perform very well in all modes and skill levels, even at high ranked Conquest, yet she is generally considered far below the meta. Artemis sacrifices mobility and early pressure for high control and huge late game damage, which is a risky but effective strategy. We are giving Artemis slightly more control over her CC by increasing the range of her trap. This ability can be extremely powerful when used in combat, and we expect this buff to create a lot more opportunities for Artemis to turn the fight around.

Bear or Druid: Which will you choose? Artio is designed with some buffs and debuffs that require hitting enemies with abilities from both stances. In order to maximize those you had to consider delaying your abilities to a slower flow that was rarely worth the payoff. We are increasing the durations of these effects so Artio can play normally and still reap the rewards.

The time has come for the glory of Rome to be restored. Bellona is often a difficult character to buff, as she always seems one step away from taking over the solo meta. After some direct nerfs and losing many of her core items, its looking quite safe to buff her again. We are focusing heavily on QoL with these buffs, adding a lot more fluid functionality to her kit, and adding some power to the parts of her kit that feel clearly lacking, like the flag left behind on Eagle’s Rally.

It’s time to move like a Jaguar! When Chaac brings down the Thunder he will now be a force to be reckoned with. Late game he can struggle to fill that frontline bruiser role, but with up to 70% Mitigation he can tactfully use it to avoid major bursts before bringing the AoE silence.

In this update we are adding a nice amount of clarity to the madness that Cthulhu can create. While in his ultimate form there will be a special offset to make sure his opponents can see what buffs and debuffs he currently has applied.

Erlang Shen might be able to spot weakness, but given his popularity and strength, we are struggling to find his. With the raw power provided by Spot Weakness he has a variety of build paths and can be difficult to fight effectively. Bringing down the power bringing up his mana cost should be just the touch needed for the SWC.

In our large healing pass last Update a few issues were created for Hel. These are largely bug fixes but they do have balance implications. Hel’s passive was not working as intended in more ways than one, and these will be fixed in this update.

We are seeing very promising stats from Loki since his rework. His popularity is remaining quite high (possibly due to Raphael) and he is putting up well balanced win-rates near 50% and the middle of the pack for gods. In ranked we have seen many more players trying him out in both jungle and solo, making him one of the top 10 most played gods at high ranked conquest. We are still seeing a good amount of concerns from Loki players about Flurry Strike, leading to this change. We are holding our ground on the abilities speed, this was an important part of the rework and Loki’s opponents need that reaction time. However, we are shifting the base damage to help his early jungle clear even more and increasing the scaling to make sure this ability stays impactful throughout a match.

We do hear the concerns around Flurry Strike and the speed of this ability, leading to this change. We want to make this ability feel rewarding to land but are holding our ground about the speed of this ability. The goal of the rework was to reduce frustration and the ability to see, react, and counter this ability is absolutely critical to that goal. We are increasing the final hits damage early to help his Jungle clear while boosting the scaling for Loki players in any role.

Persephone has brought a lot of unique gameplay to SMITE, but unique can quickly become paired with frustration. Her garden has high highs and low lows, her ability to revive and damage enemies can turn getting a kill into despair, and her ult is often powerful even when it misses. For SWC we want to reduce this final point, softly addressing a point of frustration for the World stage. Going forward we may look towards larger adjustments to Persephone, tackling all the points of frustration listed above.

The sun is shining on Ra lately! A few buffs across the season have finally resulted in him being one of the top gods in the competitive conquest meta. Ra’s healing deployable now provides a lot of additional stats to his teammates, and these numbers are clearly too high. As Ra has just recently entered the competitive scene, we are being careful to not send him back to where he was before. With these changes he should still be a clear contender, but also clearly weaker than he is right now.

The Usurper has been bringing the hurt in multiple roles. His flexible style of play is exciting but is too potent. Skewer is getting an increased cooldown, creating a larger window to fight Set and slowing down his poke and clear.

The Nile Crocodile has been turning gods of all types into unsuspecting prey. Sobek has risen in the ranks of the duo lane, resulting in him being one of the most contested supports in SPL and Ranked. Sobek brings strong CC and control with his signature pluck, but he can also threaten to solo kill squishies with his damage. We are bringing down the damage on his ult to prevent Sobek from taking such favorable trades against enemy backliners.

This little old man doesn’t need to feel like a little old man. He is riding a massive tree beast after all! We are increasing a set of his base stats to increase his mobility, lane clear, and damage potential. We do think its likely that we will look more into Sylvanus in the future, possibly by giving him a new passive.

A huge quality of life buff is being added for The Morrigan in this update. She will now have the ability to retain jungle buffs and potion buffs throughout her normal form and ult forms. Previously, if The Morrigan was relying on elixir of speed, using her ultimate would cause her to lose this effect temporarily. The same would apply to things like red buff, or power potions. Now she will be permanently buffed by this effect. It should be noted that The Morrigan does not copy the buffs or consumable effects of her opponents, only their item build. This has not changed.

We have been looking closely into power and protection scaling on god abilities. On many cases using nice even numbers results in too weak or too strong scenarios at certain god ranks. Tyr’s Change Stance is mostly used with 1 rank in it, providing a disappointing amount of stats for most of the game, so we are leaning into this being a better one point wonder.

The river goddess has achieved something that very few other gods have: 100% pick/ban rate through an entire pro season. Yemoja has been hit with a few nerfs, tempering her performance in ranked and casuals, yet she is still the number one most contested god in the pro league. Riptide is especially more powerful at pro levels of play, so we are applying a nerf to that ability. Her Ultimate also has high skill cap potential with its timing and position, and is getting a slight nerf.

We did it, Reddit! The king of the gods has heard the will of his subjects, who pointed out a possibly Quality of Life buff for Zeus. Most ranged deployables in SMITE are allowed to be fired over walls, and we agreed that Zeus’s shield throw should also be allowed. We don’t plan to apply this rule to every ability in the game, as some might have thematic or mechanic elements that don’t merit going over walls, but we are changing this for Zeus and for a few other gods.