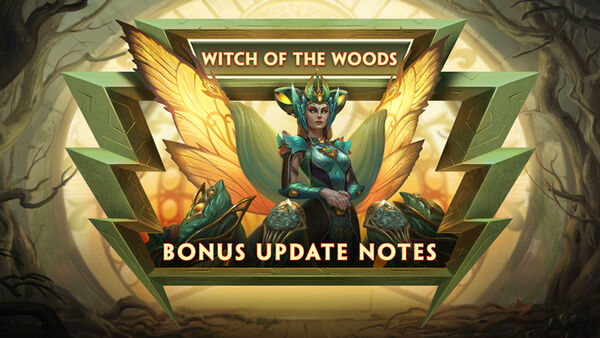 “We've reviewed the matchmaking data for various maps and we want to make some adjustments. Certain queue times were decreased to help with the server loads due to quarantines. These shorter queue times have hurt matchmaking on those specific modes.The changes we made to Joust and Conquest seemed to have the biggest negative impact on matchmaking, so we will be increasing them again to address the issue. Siege players have asked for a decreased queue time, so we're reducing it to match Clash in the hopes that the population will go up if the wait time is lower – we'll be keeping an eye on this to make sure matchmaking quality doesn't suffer. Finally, ranked conquest matchmaking appears to be in a very positive state, so we're testing a reduced queue time here as well to hopefully improve quality of life for ranked players.”

“Bonus Balance is loaded with meta nerfs this update, as well as some changes to SMITE's newest god: Baba Yaga. Bonus balance will continue to be separated from the main update by containing only top meta nerfs, adjustment to the newest gods, or high priority fixes that impact the game in a wider sense, like some Joust and Duel changes we have planned for this week.”

“Recently we adjusted a series of variables on the Joust map, with mostly successful results. Fixing minion scaling per minute has had a slightly more intense effect on the map late game which has led to some frustrating gameplay scenarios. We are toning back the tankiness of fire minions into someplace between the current state and previous state. This should give players a better chance of fighting back from losing a phoenix.”

“Baba Yaga will forever hold a special place in SMITE history for both being a crazy unique character, and also for being the first god shipped while working from home under quarantines. Baba launched in a clearly underpowered state which was exacerbated by some bugs. Baba is seeing damage increases to her ability 2 and 4, as well as increased projectile speed on her 4. This goddess has potential to be powerful, and we expect to see that soon after these buffs and more bug fixes.”

“In a similar realm as Thor, Heimdallr has been nerfed multiple times and his core metrics have dropped considerably, yet his ban rate remains at the top of the top of the list. We are decreasing one key damage hit, which is his initial hit on his Ultimate ability. We are also decreasing his vision radius to limit his utility.”

“Some impressive plays have been happening via Horus crazy ultimate ability: To the Skies. We have seen phoenix rotations and jungle boss baits like never before. Horus has picked up in popularity, especially in ranked, but his win rate still falls behind. That is why we are keeping this a small nerf. We are partially reverting the amount of speed he gains while ulting to limit his strategic options, especially for competitive play.”

“An old god is now the new top meta! In a patch filled with nerfing newer gods, it's great to see some old favorites still dominating the ranked scene. Hun Batz has become a top pick in S7 and he maintains a stronger win rate than most of the other gods we are nerfing here today. We are toning down his damage from his passive as well as increasing his ultimate cooldown. Hun Batz's ultimate is the premier assassin team fight ultimate and it should have a cooldown to match its effectiveness.”

“The Master Wizard continues to dominate ranked and pro play, especially in pick rate. Merlin outputs a large amount of damage in the late game, especially to CC'd targets or jungle bosses. Merlin's abilities have a high amount of ticks, which multiplies the magical power scaling to very high levels. These power scaling reductions should bring down his top-end damage across the board.”

“The Allfather has maintained very high metrics even through his last round of nerfs. This time we are focusing entirely on Odin's Cooldowns. This warrior can dish out a lot of damage and CC, but can also protect himself through shields and leaps. It is a common frustration when playing against Odin to nearly have him dead but then his Raven Shout and Lunge come off cooldown and he escapes again. These slight cooldown changes across his kit will give his opponents more room for counterplay.”

“Sobek has risen from the Nile after his boost in HP scaling and self healing. This additional capability to stay out for longer allows him to fulfill the support role in poke and roaming situations much more effectively. His raw ability to survive engagements however has become too potent due to the combination of this extra HP, healing, and passive protection. A reduction to his passive will make him more vulnerable in direct fights while still keeping the more active sustain he brings himself.”

“Even after considerable nerfs the god of thunder has held a near-top ban rate for multiple updates. The past nerfs have affected his metrics heavily, but he is clearly still considered a top god pick by a huge majority of players. We are applying an additional nerf, albeit a smaller one, to bring down Thor's all-in damage a bit more, which is where he seems to continue to excel the most.”

“Ullr has performed gloriously lately, with skyrocketing popularity in high end ranked and competitive scenes. Ullr brings heavy pressure and quick rotations to a team, all while being able to play multiple roles. We are increasing Ullr's mana costs to slow down his ability to spam, and we are also decreasing the base damage on his primary lane clear ability. These changes should keep him more in line with the rest of the Hunter class.”

“This unique healer-guardian is defined by her ability to cast her abilities repeatedly. We do not plan to add any specific rules to change this, but we can limit how many abilities she can cast by slowing down the gain of her Omi. We are combining that with another base damage nerf to her primary damage ability, to ensure Yemoja deals less damage even when building no magical power.”