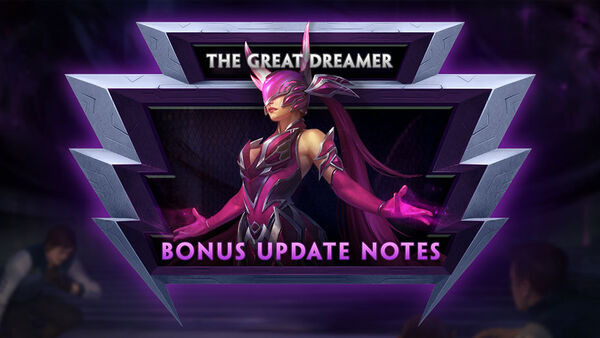 “The goddess of love is still breaking hearts. Aphrodite's powerful metrics have persisted through the last round of nerfs, so in this update we are addressing a key counterplay element of her kit. Undying love provides two players on the enemy team with complete damage and CC immunity, which can swing entire fights. The scaling cooldown combined with CDR builds makes Aphrodite too hard to punish, so we are keeping this cooldown at 90s at all ranks. Opponents of Aphrodite can now look to bait out her Ultimate or re-engage shortly after its use to confirm kills against her.”

“He has awoken. This new god is making a HUGE impact on the battleground. Cthulhu brings a strong frontline presence that can initiate through almost anything when he assumes his Ultimate form. We are increasing the cooldown of his Ultimate to make sure the pacing matches the power that it brings. We are also removing the very short window of damage mitigation he gained while transforming, as it was causing more confusion than anything else. Along with this Cthulhu will see a reduction in the amount he can heal his team. Many players are still learning how to play and play against this insane god, and he will continue to be a top priority for the balance team in future updates.”

“SMITE's newest Hunter has recently ventured into pro play, after a slightly longer than usual bug fixing phase. Even though he was nerfed many times since his launch, he immediately made his SPL debut as a top pick/top ban god. We are looking to adjust Heimdallr's counterplay in a similar way as Aphrodite. This vigilant hunter can seek refuge in the Bifrost and make escapes no other god can. It requires more planning than usual, but that's barely a concern at the pro level. We are increasing the time that Heimdallr needs to stand in his Bifrost before he teleports, this should make him more gankable while making greedy plays and expecting a quick escape.”

“As we have progressed through Season 7 we have seen Hel slowly rise to be a top meta Mid Laner. Hel's flexibility brings high damage output, along with high healing. Although she can be lacking in long range poke damage, her lane phase generally more than makes sup for it. To address this lane phase we are toning down her base damage slightly across her primary lane ability – Decay. To address her late game flexibility we are also decreasing her late game healing on Restoration. Two small nerfs to two specific aspects of her kit, perfect for a goddess with the duality of Hel.”

“The world serpent has had a stranglehold on the Solo lane Meta for quite a while now. He was starting to drop out of favor until changes to Warrior's Blessing brought him slithering back. As we look to make major changes to the Solo Lane, we want to open the meta up to more gods. We don't want Jorm to be overly bullying all of the new experimentation that will be going on here. To mitigate that, we are decreasing the base damage of his basic attack, which was previously mitigated by Warrior's Blessing. This is a significant source of damage for him, and should be an impactful nerf.”

“The Goddess of Victory finally lives up to her name. Nike's rework yielded a lot of positive feedback for providing a unique new ability while also paving the way for more balance changes. After a few more small adjustments she has finally had her breakthrough moment. Starting as a niche pick in the SPL Jungle, then slowly catching on across other lanes and other skill levels, Nike is putting on quite a show by now. The primary nerf we are applying is the duration of the Slow on her Ultimate. Six seconds is an eternity in SMITE, causing this goddess to secure a few too many kills in the early game. This will now rank up with the Ultimate.”

“Another elusive reptile is being nerfed today. Sobek, like Jorm, has been dominant in the solo lane, and we aim to apply nerfs for similar reasons. One experience that every Sobek opponent is sure to feel is the God of the Nile making a narrow escape. Sobek seems to survive through the most dangerous of fights. We are decreasing the bonus protections he gains during his Ultimate to ensure he is punished accordingly for diving too deep or missing too many plucks.”

“This versatile and elegant support has continued to be a top performer across many areas of play. Yemoja's strength comes from being able to both apply pressure as well as protect her team. The Shield Mending Waters is a potent late game tool, especially when she is able to apply it multiple times in a single fight. This is being toned down along with the Riptide speed buff. To make it slightly harder for Yemoja to keep her allies alive through fights.”