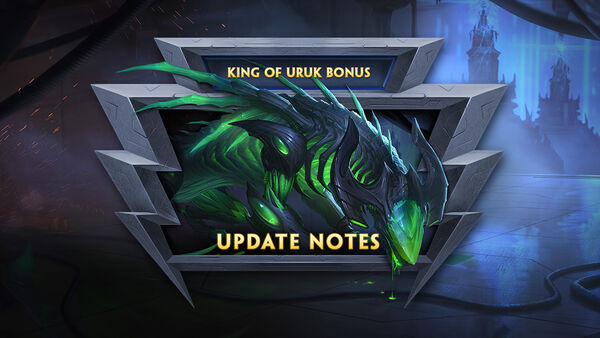 Mage itemization has been a large topic of discussion and we are buffing a set of less often used items in the main update. However, we had to take a look at one of the most popular and potent mage items: Spear of Desolation. The new feature that speeds up your Ultimate even more has been quite powerful, and can lead to a heavy snowball effect. We are tuning this down a little to even it out against other flat pen choices.

In 8.1 a few hybrid items were shifted more toward power, and away from defenses. Since then, these items have become extremely powerful in both Jungle and Solo, as the stats are just too good to turn down. We are decreasing the power on both Ancile and Shifter’s Shield to level the playing field between these classes and the rest of the roster.

The most powerful Starter Item Upgrade is seeing a heavy nerf. This item has been utilized by all sorts of classes, not just Junglers, and to great effect. The passive is what makes this item fun and interesting, and we aimed to preserve that. It’s a powerful passive so the stat nerfs need to be heavy to justify keeping it as is. The hammer is losing all of its Penetration and half of the CDR to pay that price.

This god is often thought of as the perfect test of skill. Anhur has become the absolute number one most played god in Ranked Conquest, and with win% stats that are higher than usual for him. Anhur was also prioritized at the SPL level, and it seems clear that a few damage nerfs would bring him down to the level of other hunters.

This god’s overall utility has continued to make him a top pick/ban in ranked play. Apollo has been surprisingly consistent even through some recent nerfs, so we are targeting a few other parts of his kit we expect people to really feel. His passive will become a bit harder to stack now, especially in the late game. The Moves will now have a weak speed shift between the slow and the buff. Finally, his Ult will now consume much more mana as he flies in the late game, as his ability to monitor objectives from the sky is bordering on ridiculous right now.

The goddess of Wisdom is playing better than ever (and soon to be looking and sounding better too). Adding damage to Confound caused a huge reaction in her metrics, so we are toning that back slightly along the exact same lines. There has been a lot of discussion on changing more of Athena’s abilities but the design team feels that those work well together and in the spirit of her kit. So, instead of reworking other abilities we are going to keep looking at core balance functions like damage, durations, and cooldowns.

The King is here, and he is… strong. Gilgamesh was nerfed in PTS and is still sporting some strong numbers. His damage numbers are still on the high end compared to other Warriors and Assassins so that created a clear place to nerf him. Sun-Forged Scimitar provides a unique type of damage scaling based on Health, which is going to come down. Also there will be a large Power Scaling nerf on his large AoE damage of his leap. Then finishing this off with a small cooldown nerf as well.

This horse is amazing. The total damage that can be done by Cavalry Charge makes it one of the hardest hitting abilities in the entire game. Healing nerfs have hit him but his damage and kill potential stays high, along with his pick/ban%. Cavalry Charge is seeing a significant nerf to open up the solo lane to more gods.

He refuses to give up the throne. Set is still the most banned god in ranked, often because of his ability to hard carry more than any other Assassin. We are decreasing his main damage output source, as well as making him easier to counter from other physical gods. This should help him be less of a force to be reckoned with.

The croc is consistently a solid pick. Solo, Support, or non-Conquest he brings a ton of value to his team in positioning, CC, damage, and tankiness. Sobek’s charge prey (often called his “pluck) is his signature ability, allowing him to put enemy gods drastically out of position. We are slowing down this cooldown slightly to take him down a notch.

Season 8 was defined by Tiamat and continues to be. Her stats have seen significant drops from previous nerfs, but she is continued to be highly prioritized at pro play. Tiamat continues to be surprisingly good at surviving fights even when she is building full mage. Her damage mitigation was nerfed for this reason recently, and now her self healing is being nerfed for the same reason.

The newest moon god continues to thrash the ranked queues. As he has been adjusted his Ultimate continues to shine as an especially terrifying ability. We are making it easier to counter him, by inflicting more damage while he sets up, as well as decreasing its total damage scaling.