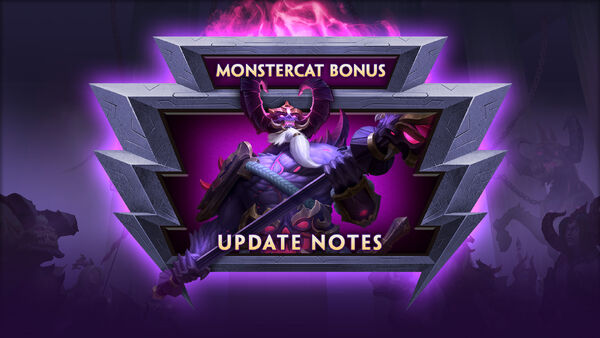 The enhanced Purple Buff provides a large damage increase above the rest of the enhanced options. We are decreasing the Attack Speed provided from the enhanced portion only to bring these enhanced effects closer to each other.

Hunters, given how damage per second focused they are as a role, often focus onto one build given time. The Critical Strike build, bolstered by the strength of the Gilded Arrow starter and tree, has become the build of choice for every hunter. This build provided a strong power curve, high end game damage, and the gold generation confirmed a lead through the early purchase of the 3K damage potions. In this patch we are adjusting this build overall down in power while bolstering some underused anchor items. First up is Gilded Arrow. This starter is both potent in its own right and builds into Ornate Arrow, the main choice for top end hunters. The gold gain in particular allowed hunters to get key power spikes much earlier than their opponents. That is the strength of this item but at 10 gold it was simply too effective.

Ornate Arrow has a similar story. This item asks you to keep gold in reserve for stats and it makes up for it in the long term by being efficient and providing value in longer games. This value however was simply too intense. In games that went even a little over a standard match length multiple 3K potions could be purchased as other roles are getting their first. Even at 5% this item will still provide a high amount of value, especially in longer games.

While Diamond Arrow has not been built as much as Ornate Arrow we expect it will see a rise in purchase now that it is closer in power to Ornate Arrow. We are mirroring the change we did to Gilded Arrow, lowering just how much gold this item can generate to prevent a difficult to overcome surge in efficiency at level 20.

Executioner is a core aspect of many hunter builds, but especially the Critical Strike build. Through little effort, items like Executioner allow Hunters to reach strong combinations of Power, Attack Speed, and Critical Strike chance. A small adjustment here can help Hunters make more meaningful item decisions later in their build when they look to specialize in a particular build path.

Atalanta’s has seen heavy adjustments through its lifetime and it has settled in an overall underperforming spot. While it provides strong conditional utility the base stats made it undesirable compared to a higher throughput build. A bump in Base Power brings it closer to other options.

Asi is another potential ‘anchor’ item that can bring forth a bunch of different build options. Serving as a high attack speed and high Lifesteal option it has the potential to shape builds early. Given its potential we want to be careful with how we bring this item up. While a 5 Physical Power increase feels small, Asi’s combination of Attack Speed, Lifesteal, and Penetration amplify this power increase.

Bluestone Pendant has pushed the Solo meta into a single direction. Everyone builds Bluestone and the lane itself is quite aggressive. One thing we have seen from feedback is that the aggression in the lane feels good right now so adjustments we make will be careful not to disrupt what is currently being enjoyed. Bluestone itself provided aggression through power and wave clear, but also a lot of defensive sustain. We are cutting the HP5 in half, lowering just how much health is restored in between each wave.

Bluestone Brooch’s bonus damage increase really pushed Warriors ability to dive backliners and succeed in killing them individually. At 25 base damage on the proc it felt underwhelming but 75 was too much. 50 should be a solid middle ground that makes it more comparable to the utility of other upgrades.

Reinforced Shoes and Greaves have really taken a step forward in build placement. Supports and many Warriors are heavily valuing the early protection spike these boots provide and can make it feel too difficult for damage dealers to punish poor positioning or play. We do think its balance point however is quite narrow, given these items saw very little play for some time. While we have future plans for boots in general in the next patch (Mid Season) we did want to tone down one of its strong passive benefits; CCR. Supports will have to respect early CC more and be less resilient to strong CC chains.

The slayer of enemies has sure been living up to his name. While not always resulting in a ban his pick at all level of ranked and in the SPL has shown this god to be quite strong. Desert Fury in particular provides long duration Crowd Control Immunity and solid damage output on a lower cooldown. This made him exceptionally hard to fight into and given the strength of this ultimate, it probably deserves to have the standard Ultimate cooldown.

Athena has been confounding her enemies to great success. While this extra damage really helped round out her kit, the raw damage add it provided was too high. Rather than fully removing we are looking to tone down Confound’s damage in addition to Reach’s damage. This should bring her overall damage to more normal levels while preserving the buff that brought her into contention after a long duration of being a low pick support.

Gilgamesh has simply drop kicked all his previous nerfs away, proving quite resistant in attempts to bring his performance down. In this latest round we are targeting his frequent slow from Sun-forged Scimitar and the raw burst more offensive Gilgamesh builds can bring with Drop Kick. Enemies should find Gilgamesh easier to escape and more likely to survive that drop kick to the face.

King Arthur in particular benefitted from a strong Bluestone Pendant, but even before it was the go to choice he showed himself to be a strong solo laner. We think given his strong performance, especially in the SPL, he needs an additional nerf. Steadfast’s passive damage mitigation makes King Arthur exceptionally difficult to take down and synergizes well with Protections. A decrease here should be a noticeable decrease to his raw tankiness.

We have been watching Persephone’s rework very closely. As described in her rework patch and blog post; she had a very unique style but created unhealthy gameplay scenarios. As far as early metrics go we are seeing many new players try Persephone and see much more success; and while early feedback was worried she would be weak, players are learning how to use her new kit to maximum effect. Given her strong performance, especially as players learn the new kit, we do feel she needs a downward adjustment on her primary burst combo. The bites in particular from a Harvest/Flourish combo seem to be contributing too much to her primary combo and are seeing a reduction in scaling this patch. We will continue to watch her closely and respond to feedback. In the main patch we are fixing many issues players came across (and bringing back that chunky skeletal bone rush sound) and in the long term will look at more long term feedback such as her passive feeling underwhelming.

Scylla has done exceptionally well as a Mage who is capable of damaging strong frontliners, even with Magical Protections. Crush’s Rank 5 really pushes this identity but is currently pushing it too much. At 15% enemy tanks still need to respect Crush but this makes it less devastating to face.

Sobek is another top contender for the Support role in the SPL and Ranked. In particular his strong engage is followed up by a major zone control ultimate that gives time for his CC chain to come up again. We are lowering the slow and protections provided by Lurking in the Waters to give enemies more opportunity to punish a risky pluck.