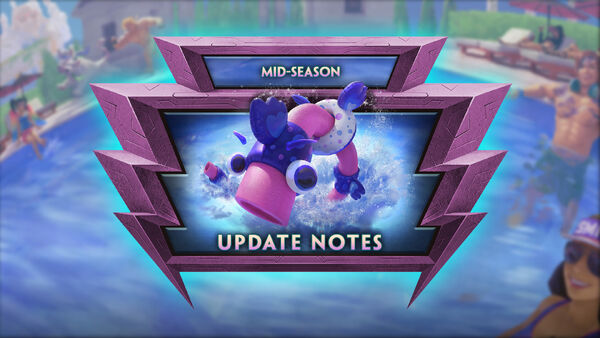 “Manikin Hidden Blade was double dipping on providing Magical Basic Attack Power as well as raw Magical Power, allowing gods with Magical Basic Attacks to hit harder than intended.
Manikin Hidden Blade also currently notes that is does Missing Health Damage but since its launch as been dealing Max Health Damage. Its overall balance state feels roughly appropriate so we are keeping this as intent and will be updating the text in the full 8.8 release.”

“The rework to Sundering Spear has definitely left a powerful impression. Our overall goal to bring this relic some consistency has been met, and being able to consistently chunk your opponents while marking them for increased damage has been too potent. We are reducing the damage Sundering Spear provides to encourage players to follow up on the damage amp to get the most out of it.”

“Bluestone Pendant is receiving a nerf! We previously held off nerfing this Starter, working instead to bring other options up in power to better compete with this choice. This allowed up to create a healthier set of starter options, with Bluestone seeing contention from the likes of Hunter's Cowl and Warrior's Axe. Even still it has continued to overperform them slightly and we feel now is the time to bring Bluestone down a peg rather than continue to bring up other starters which could potentially make them too potent.”

“Support players currently feel like their starter choice has been solved, with nearly all competitive supports playing Benevolence no matter the situation. While we have worked towards bringing other starters up in a similar approach to Bluestone, its overall efficiency is still too much. We feel both Sentinel's Gift and War Flag are in a better spot to ‘support’ the support role so we feel comfortable reducing this items efficiency. We are lowing the XP5 per level to slow down how much free XP this item provides. The math of this roughly works out to a Support players being half to slightly more than half a level lower than they would have otherwise been by level 17.”

“Fighter's Mask has been a unique start in the solo lane, resulting in some early aggression. We like the strategy but want to tone it down a notch, knocking from Power off this strategy so it feels more closely comparable to Warrior's Axe and Bluestone Pendant.”

“Gilgamesh may as well be immortal at this point, showing a huge resilience to nerfs that traditionally would tank other gods. This round we are looking toward Sun-Forged Scimitar and the initial burst. With its low cooldown the damage of this ability can really stack up, especially in more offensive builds. This should relieve enemies from some of this pressure and allow them to fight back.”

“The Dark Enchantress continues to weave her spells to great effect on the battleground. Overall players have really learned to utilize her multiple sigils and maximize the tradeoff between playing aggressive vs. losing her safety. With all this experience she continues to be overperforming so we are lowering the raw damage Sigil Mastery can dish out.”

“Sol has really been heating up! With Stellar Burst being more reliable and sped up her ability to trade against her opponents became significantly easier, pushing her towards the top of the carry role. A reduction in this abilities output will better match her new ability flow.”