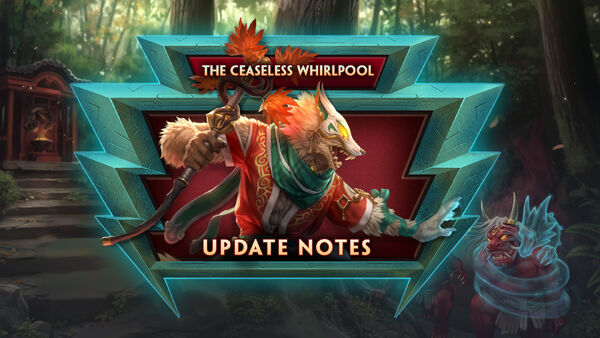 Fighter’s Mask is a staple of the Solo lane. It’s strong clear combined with delaying your starter choice brings unique flexibility that most of our Solo laners seem to be enjoying. We want to ensure other routes are viable however so we are looking at adjusting Fighter’s Mask along with its most powerful pairing; Sundering Axe. Our goal is to keep this strategy as a viable and interesting option but temper it so other builds can get their chance in the spotlight.

Sundering Axe allows Warriors in the late game to have a strong mix of burst pressure, extra sustain, and strong tankiness that makes this choice incredibly potent. Reducing the base should bring this upgrade into a solid spot.

Soul Gem’s power, utility, and survivability make it a strong core in the current mage builds. We are reducing the burst heal this item provides to tone down the survivability aspect.

The bow meta has largely been enabled by the combination of Ichaival’s high power but also the raw Attack Speed Odysseus’ Bow provided to synergize with that power. In the long term a reduction in Attack Speed on this item will help it fit into builds in a more healthy way; and in the short term reduce the raw effectiveness of the current bow builds.

Stone Cutting Sword similarly enabled some Tanky Warriors to bolster their defenses and limit the option for damage Assassins to fight back. Similar to Void Shield the focus is on reducing the protections provided.

Winged Blade is the final item to round out the Tanky Jungler changes. For its cost it was simply too efficient and fit well in bolstering a Warrior’s already tankier stats.

Charybdis has been a whirlpool of feedback! Her array of unique strengths and weaknesses are something we expect players to learn how to leverage over time and as such she will likely rise in the win rate without much intervention. Due to this we are currently focused on resolving core bugs and issues that are hindering her gameplay. Looking forward we will evaluate if she needs additional buffs after players have obtained additional mastery with this goddess

Gilgamesh continues his strong spree, showing that our nerfs are not hitting the mark. Winds of Shamash is a potent teamfight ultimate, one that is worthy of a longer cooldown and a reduction to its ability to trap people inside. Dropkick’s high scaling enabled bruiser and offensive builds that really let him bully his opponents and quickly kill squishies. Finally, Hero’s Advance creates a large field of increased movement that really enables his team to follow him wherever he goes. These strengths are all being reduced.

The Dark Enchantress has continued to weave her powerful sigils. The frequency at which she can get her damage and control out combined with the safety of the heal from her Ultimate can make her difficult to approach. We are offsetting these nerfs with a boost to a lesser used Sigil; Soul. The clone will now survive longer and deal more damage over its lifetime

The Broken One has lived up to his name in recent patches, showing himself to be a strong all around Warrior. Sickle Strike and Spirit Flail provide consistent pressure that can be overbearing; especially from ahead. The extra second we are adding should provide that extra breathing room when fighting into Osiris.

With the rework of Persephone we watched closely to see where she would overall fall. Since then her overall stats and ban rate have remained high but are much closer to a healthy range. A reduction in the flower speed and base damage will make her less of a thorn in the side and move her towards a more balanced point.

Yemoja has remained one of the most contested gods this Season. River’s Rebuke has the potential to split teams apart and shape the flow of a fight. For something so strong, especially when the rest of her kit is piloted by an expert, a longer cooldown feels appropriate. Additionally we are removing the healing bonus provided by her healing Basic Attacks. This is an additional source of her strength that we think she doesn’t need to bring to a team to be effective