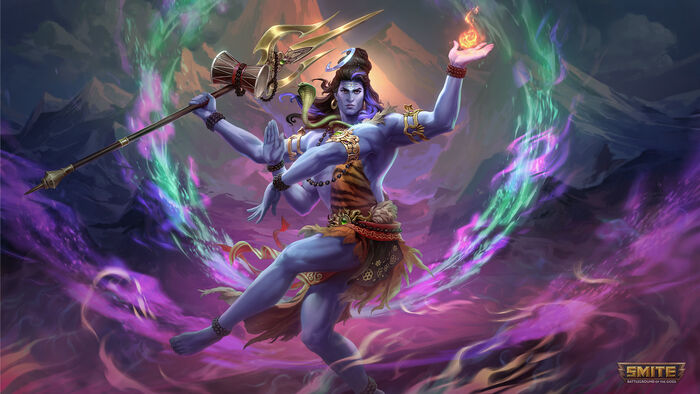 Shiva cycles between the states of Bliss and Destruction by dealing damage to enemy gods with attacks and abilities. Each state provides benefits to himself and allies or hindrances to enemies. On switching between states Shiva’s non-ultimate ability cooldowns are reduced by 2s.

Shiva’s trident is emblazoned with the fire of Agni as he spins it around dealing damage, pulling in enemies and leaving behind a firewall at the edge.

Shiva hits the butt of his trident down into the ground, shaking the damaru drum and causing energy to dissipate and damage enemies. Depending on the selection, enemies in the chosen segment are knocked up as well.

Shiva dashes into a pillar of fire where he meditates for a short duration, taking reduced damage and CC Immune, before being able to dash out again. Each dash deals damage to enemies and as he meditates the pillar emits an aura.

Shiva performs his Tandava, channeling for the next 6 with CC Immunity and 20% damage mitigation. Every 1.5s he performs a step that can be preselected.

Step one – Ally Healing and Mana restore.
Step two – 50% Damage and Healing and also amplification of next step radius and effects.
Step three – Damage and Shield reduction to Enemies.

The new Season of Conquest has begun! Players are getting to work on optimizing the map and a few things are going to need adjustment. First, we will be addressing the Jungle start by changing one key timer. Both camps of “back harpies” will now spawn later in the rotation. This is to prevent Junglers from quickly leveling up to 2 before other roles and ganking mid. That strategy does not seem to be a popular way to start on the map, but we don’t want to leave this option available at all. The next change is to the Duo side. The Draugr pit harpy trio was too easy to kill and worth too much which could quickly snowball the lane, this is being changed to a single Alpha Harpy to reduce that effect. It will also spawn one wave later.” And last but not least, we are making some adjustments to the Obelisks. Overall the reward provided by this new objective was too much so we are bringing down the team gold reward a significant amount, as well as making Indra’s Scepter deal less damage and making these harder to invade.

For the first time in years SMITE has a new permanent game mode, and the launch has definitely been exciting. A huge amount of players have tried the mode and early numbers are showing many indicators of success. We plan to closely monitor this map and apply balance changes as needed. The first topic we are tackling is the Jungle Objectives. These are dying too quickly which does not give teams a chance to contest. We are scaling these up to ensure that more team fights take place over securing the Juggernauts.

We aim to get most of our nerfs into the bonus balance, but a few changes required us to collect a little more data before a decision was made. We have now seen a pattern of increasing split-pushing strategies and we will take steps to discourage that. Persistent Teleport is giving a viable teleport option to the Solo lane and rewards players for participating in team fights. We are increasing the base cooldown which will slow this relic down, especially when its owner avoids fights.

This is the other half of the change discussed within the Chaotic Beads section of the Bonus Balance. These damage dealing relics create some scary possibilities, so we want to have the proper tools to balance them as needed. Aegis’ max damage will now be based on the opponents % Health, which is a significant nerf and allows for easier nerfing in the future.

We are seeing a LOT of players pick up the new meteor rod, although we hear constant feedback that its impact is inconsistent. We have sped up the warmup time to help this item hit its target more often, but are pairing that with a small damage nerf as Mage’s have benefitted from a variety of boosts this season and are in a much stronger place than the end of Season 8.

Shortly after the Axe nerf in bonus, we will be applying a small Bluestone buff in the main update. The axe nerf might be enough to bring this item up into a place where it’s considered meta, but we can see in the data that the Solo gods who most benefit from this item are still struggling significantly, so we wanted to give it a small boost. We are looking forward to seeing a variety of starter options in Solo this year.

As we go through these first few updates of the new season we want to continually look for ways to shake up support itemization and make more options viable. Stone of Binding provides a lot of stats for its price, as the only remaining T2 item in the game, so it’s difficult to add too much while keeping the cost so low. A boost to both types of protections should make this item compete with the other options in the Support build.

As we shift some power away from Crusher in the bonus balance, we want to make sure that Assassin’s still have strong late game penetration options. Titan’s bane seems to have fallen off, so we are adding a small amount of power and lowering the passive cooldown to help this class persist into the late game.

This item was heavily discussed during PTS, with all the powerful Relics on their way into the game, it was only logical that Relic Dagger would be a strong choice. We wanted to make sure players got the chance to test this first and prove its worth, which has been verified. We are nerfing the Cooldown Reduction effect this item has on Relics.

This hungry little god needs a lot of help. Bakasura has a storied past of being able to clear the jungle faster than any other god and snowball games with his terrifying ultimate, but we haven’t seen that Baka recently. We are looking to provide him with even more utility within god vs god combat by adding a new component to Eat Minion. He will now be able to shorten the cooldowns of Take down and Butcher Blades when he successfully eats a minion, giving him powerful re-engage potential.

The Queen of the Gods seemingly has not graced the battleground in ages. Hera brings a unique skill set to a team, with her massive pet and self shield instead of the traditional ranged poke and mobility that is present in the top Mages. We are giving Hera some more poke damage attached to her powerful polymorph CC, and increasing Argus’ late game protections to make sure he lives long enough to see a team fight.

Many of the Solo Lane Warriors are doing fine right now, the main exception being those who rely on Bluestone, and Hercules. Like Terra, this god has strong potential to take over with even small buffs, so we are playing it safe. Hercules relies on a strong combo of burst damage and CC, and we are buffing the damage on this key skillshot to make sure that he is effective when he does hit all his buttons.

The nerf to Crit damage in 9.1 was quite significant, although it seems that in most cases the buffs to hunter items did a great job compensating for it, and a large portion of the class is doing well in the new season. Some gods were even more vulnerable to the changes, though, like Jing Wei. We are buffing the cooldowns on her 2 primary damaging abilities to make sure she’s got the lane presence she needs to compete in the role.

You’re finally awake. Kumbhakarna is known for his strong CC by putting gods to sleep, among other things. There is a unique effect on Mighty Yawn that continues to CC enemies if they are woken up from the mez. With this new buff it will now be more beneficial to wake targets up early, especially if the mez functioned as a well timed interrupt. Kumba might even be able to buy Mystical Mail now! (NOT actually advised)

The Squirrel god has some shiny new acorns, but one seems to struggle to keep up with the rest and the Crit changes certainly complicate things further. We are applying a set of buffs across multiple stats on this acorn. Let’s see if full damage Ratatoskr can live again!

When we fixed Terra’s interaction that allowed her to Shatter a Standing Stone for 2 different effects at the same time, her priority did go down, especially in high ranked play. This goddess is still far from weak, so we are being careful with her buffs and starting with an ability that has an overly long cooldown as a result of her top-of-the-meta days.

This new season provided a lot of shakeups on the Conquest map, some of which heavily impacted the pacing of the game. In the first few days after the update we saw some concerning stats and feedback regarding heavy snowball effects, but those have gradually recovered each day that players continue to optimize the 9.1 map. In light of this new data as well as plenty of helpful comments from PTS players, we are going to ease back on some of our planned changes. The start time change will be reverted, so there will be no noticeable change from 9.1 to 9.2, and the Obelisk gold reward is being partially reverted to make sure it keeps its value. The Duo Lane change will go through however, as we still see ADCs gaining more gold and xp this season than other roles.

This PTS change might come as more of a surprise. As we saw, Warriors have been performing very well and took a good amount of nerfs to their items in 9.1 and top gods in the latest bonus update. To prevent Guardians from taking over that lane and encouraging a stalemate meta, we are reworking Jade Emperor’s Crown so that it will be significantly weaker when rushed in lane. Instead this item will now be a more potent late-game item, with higher cost, stats, and a percentage based reduction effect (although in a shorter range). In this way it can still be bought against Physical heavy comps, without having as much impact on the Solo lane. Runic Shield is a symmetrical item but it does not create the same issues as we rarely have aggressive Guardians being countered by full tank Warriors, so we will be taking more time in considering our plans for that item.