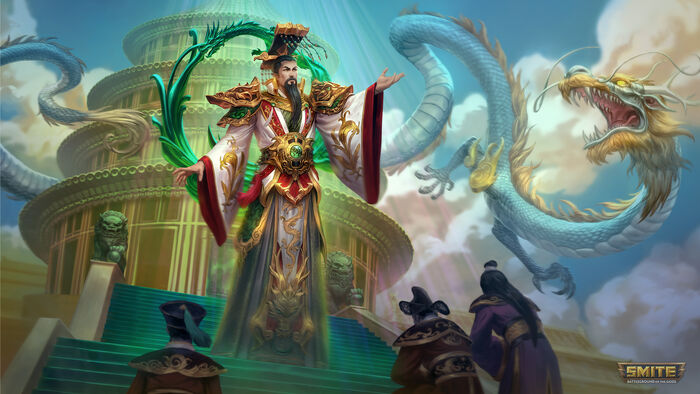 Master of the Dao

Flames of the Phoenix

Yu Huang conjures four cinders of the phoenix, spreading them in an X shape. The cinders rush inward, dealing damage once as they travel. When the cinders meet, they explode in a field of flames that persists for 3s, burning enemies inside. If Yu Huang is Attuned, when the cinders explode, all enemies in the area have their Magical Protections reduced.

Yu Huang begins cultivating his Dao before firing a projectile that damages and slows enemies it passes through. As it travels, it leaves behind a trail that explodes, damaging and rooting all enemies. This ability can be fired early to deal 60% of its damage, gaining additional damage up to 1s. Yu Huang can also continue charging up to 3s to earn more Dao on firing.

Yu Huang calls forth the Pearl Dragon from beneath him, banishing himself into the air and becoming untargetable. He then gracefully floats back down to the ground in a controlled flight, damaging enemies where he lands. While Yu Huang is floating, he may refire this ability to increase his downward momentum, causing him to fall faster. If Yu Huang is Attuned, the Pearl Dragon follows him as he descends, knocking back any enemies beneath him.

Yu Huang manifests a huge surge of dragon-shaped energy, becoming CC immune and summoning the Pearl Dragon to oppose him. He then has 3s to aim his dragon of energy toward the Pearl Dragon, who will charge directly at it. Both dragons damage and push enemies caught in the blast. If the dragons collide, a damaging explosion occurs in the area. If Yu Huang is Attuned, the width of the dragons is increased by 50%.

With Update 9.4 we are also releasing the prizes for the winners of our Season 9 Streamer Showdown competition, that was hosted with Nexus at the beginning of Season 9. Each of the 3-Winners has their own in-game cosmetics as prizes, and you can earn these for free by completing in-game missions! Make sure to log in and earn them all! 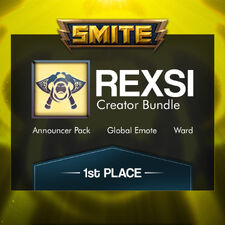 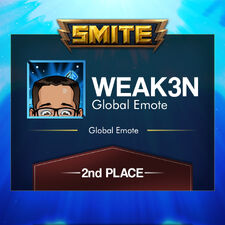 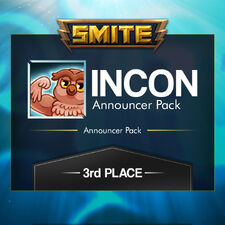 These first two Conquest changes are subtle, but have a lot of potential to create change. The goal of these changes are to make Duo Lane less volatile, and to slow down the Gold and XP gain of Mid and Jungle. We think that shifting XP away from Mid/Jungle and into the hands of Carry/Support at an earlier time in the match will help move us toward both goals simultaneously. We are also decreasing the total team XP awarded by the Obelisk. This will slow down the pace of the game and decrease the snowball factor. Conquest will also be seeing more significant changes in future updates.

We hinted at this type of update in the previous update notes as well as in some extra communications from Design Director Ajax, and now the moment has arrived! This update will be a Nerf Update – meaning that the entirety of the God and Item balance sections will be focusing only on nerfs!

The SMITE community has been vocal about damage being too powerful and too present in SMITE and this update will be taking a major step to address that. In the previous update we looked at the two most specific meta sources of burst damage – Mage Penetration and Berserker’s Shield. Those changes were just the beginning though. This update features a multitude of nerfs across many of the top Gods and Items to continue this effort.

The damage topic is often described as a “game wide” issue – but changes have to be implemented specifically across various gods and items, so the process inevitably requires us to work through one god or item at a time. When going through that process it made the most sense to start by nerfing the most powerful and highly prioritized gods and items in the game. Applying this many changes all at once could have far reaching and unpredictable results, but we saw the clear community desire for it. We think we have formulated a cautious and consistent plan to execute this large amount of nerfs in a single update.

We are eager to hear feedback and to monitor game data from this update, and we are open to doing more nerf passes like this in the future if necessary.

Another common point of discussion is Crowd Control. There is a game wide rule that impacts the strength of CC chains in SMITE, so we can effectively nerf CC game wide with a single set of adjustments.

Diminishing Returns (DR) is a concept applied in many multiplayer games, and it is always active and present in SMITE. DR causes gods to be CC’d for a shorter duration than the ability specifies if and only if they have been affected by another CC effect within the last 15 seconds.

This weakens the overall effect of “CC chains” in which multiple gods or abilities can work together to keep a single opponent locked down for a long period of time. If you get stunned, then stunned again, the 2nd one will be affected by DR and thus be shorter. There are some exceptions like Knock-ups and Channeled effects like Grabs – these are not reduced but do apply DR to reduce the duration of subsequent CC effects.

We are open to addressing CC further by nerfing the duration of the effects on specific god kits in the future. We are also open to revisiting the CC and DR rules in general to make this system more clearly communicated and consistent. Those possibilities will be decided upon at a later date depending on the data and feedback from this update.

This is a long list of item nerfs and we aren’t sure if it’s worth it to individually explain why each one was changed. In general, all of these item changes follow the logic defined above. These items are the most popular or most powerful within their archetypes, and thus will be nerfed. Almost all class/role archetypes were nerfed in some way, this might create new imbalances based on which class/role is affected more heavily by these nerfs, and it will be a big priority in the next update to adjust more items and gods with the primary goal of making sure all roles continue to feel equally flexible and powerful.

Belt of the Berserker

Amulet of the Stronghold

It is easier to identify the top performers for gods, and god changes have much less ripple effect on the rest of the game than item changes do. With these changes we expect that some nerfed gods will continue to remain at the top of the meta, and then more nerfs will be planned for future updates for them. We also expect some number of new gods to find new room for viability, and those gods will be individually evaluated to determine their nerf status.

This update’s rework is Erlang Shen. We hear the player feedback that wants us to keep the flex capability of these gods as good as possible while still accomplishing our goals. We prioritized that feedback heavily with Erlang Shen’s design. With these changes we are trying to not just bring down the god’s performance in the role where they are overperforming, but also noticeably and clearly buffing the role where they haven’t been as successful. This is a potentially complex topic, as most reworks are, so we will break this out into more clear sections.

Why would we want to rework Erlang Shen? What are his problems? Does he meet our criteria for rework?

Erlang Shen is one of the top pick/banned gods in SPL, being the #3 most banned god at the S9 Kickoff Tournament, and #5 most banned god at SWC Season 8. Although he is clearly a top priority, his Normal Conquest play count is toward the bottom of the pack, coming in at #77 out of 119 gods. So even with his powerful performance in SPL he is not a god that many people are interested in playing.

Erlang Shen also overperforms in his flex role. In Ranked Conquest his Jungle is played significantly more than Solo and boasts a nearly 4% boost in win% over his Solo, which is huge. In SPL his gameplay is nearly 100% in the Jungle. This makes him quite clearly one of top Junglers, if not the actual #1 Jungler.

We are happy to support gods that can flex roles, but Erlang Shen is an outlier who takes this flex too far. His jungle performance pushes out many other gods who we would like to see in the role, and he sets a standard for tankier Junglers because of his Warrior stats.