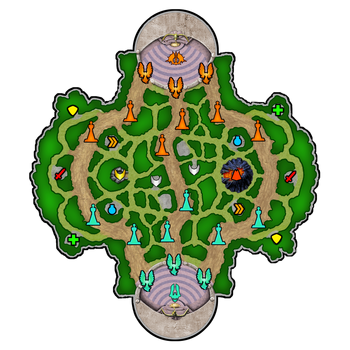 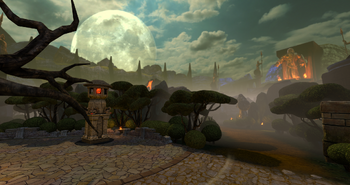 Slipknot is in SMITE!

The music and counterculture experience created by the multi-platinum sonic phenomenon and nine-piece force of nature, Slipknot, arrives in SMITE through this one of a kind crossover event. Squad up as the Slipknot band members and battle against the gods of SMITE!

Blast from the Past Battle Pass!

The first Conquest Update of Season 9 is bringing a lot of detailed changes. When updating our maps we want to give players as much specific info as possible, but that can also make it difficult to read through the notes and comprehend the main concepts. In this section we can summarize some of the goals and expected effects you can expect from the 9.5 “Knight’s Keep” Conquest Map!

The Conquest changes fall into 2 major categories: Design and Balance. Check these notes for essentially the TLDR of each Conquest section.

The primary goals are to reduce the early game snowball effect and to decrease the chances of “sweeping victories” in the late game where one fight creates too large of a lead, or even ends the game.

First, the major design changes. With each Conquest Update players expect mechanical changes as well as new environment art and this update will bring both.

The changes to game mechanics are focused mostly around the Obelisks. We wanted to make the entire flow less snowbally, easier to understand, and have a more clear and impactful reward.

Obelisks will now have medieval themed visuals for the structure and the offerings, and will be filled up for a reward in a similar manner as before. However, offerings now will drop only from Lost Knights who spawn within Mist across the map, and the reward will be a siege weapon instead of Indra’s Scepter.

There is also a significant environmental art change to the duo lane, where the Knight’s Keep now stands.

We also made a series of intense balance changes to this Conquest map with the primary goals of reducing snowball effects and creating noticeable changes to gameplay in multiple phases and roles.

Overall total XP and Gold gain rates have not changed significantly, but have been shifted around in many ways.

Lane Minions and Jungle Camps are also going to be noticeably more tanky. This will encourage more fighting in waves and will give Junglers a larger advantage when killing camps due to their Starter Item Selection. This change creates a huge ripple effect across the map.

Contested jungle camps will now spawn less often, as most players will have less down time between waves.

We have also added a lot of specific designs to fine tune individual lanes and roles. All buff camps will be easier to clear on the very first spawn to ensure that there is a lot of role and pathing flexibility from the start of the match. Individual buff camps now have different stats, XP, and Gold values, and Harpy camps across the map have been individually tuned to their XP and Gold values, and recolored to display the differences.

The ability to dive towers has been a common point of discussion in the community recently. We did increase their damage but with the major changes to god Health and Protections we needed to make sure we amped up towers significantly. These changes are designed to make sure towers are more lethal than ever, even with the buffed base stats of 9.5. This makes it noticeably harder to tower dive in the early game, and also makes it harder to siege bases, which will decrease the chances of a single team fight leading to the entire map being cleared. Towers will not only be more lethal, but also have more HP, including a significant buff to Titan HP.

We also made Jungle Bosses considerably more lethal. They will also now deal Magical and Physical damage, making it harder to tank up against them. This will create more risk around taking bosses, encouraging fights and making it harder to snowball.

It was also important to us that we took the base stat changes and conquest goals into account on other game modes. Following this logic we also buffed the structures and most of the objectives across all SMITE maps and modes

9.5 will also bring what is potentially our last round of item nerfs. 9.4 hit top performing T3s, 9.4 bonus hit starter items and T1 or T2s, and now we are doing another pass on hybrid items. Items that add both offensive and defensive stats are often quite powerful in SMITE, and can lead to some frustrating issues. With these nerfs we hope to decrease the amount of damage output coming from Warriors, Guardians, or people building like them. With everyone getting more defensive base stats it also makes it easier to build into these items, so we want to be sure to nerf them along with the TTK changes going live.

In this Update we will be introducing one of the largest sweeping balance changes in SMITE history. Most of the dev notes will be below in a more long-form discussion on the specifics of why we landed on this change and how we went about designing it. We want to thank all of our players for their constant feedback throughout 9.4 and before in helping us gather the proper data to reach this conclusion. This is going to be an especially exciting SMITE update!

The Bear cannot be beat. About a year ago we were looking at ways to buff this goddess because she had dropped so far, but since then she’s been a nonstop top pick in the Solo Lane. This update she is getting nerfs to her passive, which stacks protection shred on enemies, as well as to her main damage ability.

SMITE’s wacky mage has had a lot of rumors of becoming meta but hasn’t ever quite gotten there. She has a unique play style that appeals to a specific audience, so she might not be top of the meta ever, but we do want to keep inching her closer and closer to that power level. Baba’s Brew is her primary poke ability and cooldown buffs often have a big impact on metrics, so expect to see some more Baba in 9.5!

The last round of nerfs were not enough for this goddess who is terrorizing the battleground. Currently she is leaning a lot on her Ultimate to gain pressure in lane and in team fights, so we are increasing this cooldown and decreasing the base damage to that ability.

The Slipknot Update is also bringing a few more nerfs that have come from more recent data. Eset has continued to put up big numbers in the SPL, especially from the support role. With Mages getting more defensive stats in this update we anticipate that she might become the actual best support in the game again, with strong mid lane stats in lower skill levels to back it up, so she is getting a small utility nerf in this update.

The King of Season 8 is still reigning supreme in 2022. In this update he is being nerfed in both his power scaling damage and a key team utility feature. This large power scaling nerf is especially targeted to his Jungle performance, where he continues to be a top pick.

We haven’t seen much from this god in Season 9, so some carefully planned Hercules buffs have been devised. Herc can be an unstoppable force if he snowballs his lane too heavily or reaches near unkillable states, so we aimed at improving his teamfight presence and synergy with other gods. Hercules’ ability to pull enemies into his team is a valuable effect, and he will now be able to do that even more often in the late game.

Audio cues are especially important on this trickster god. The stealth and misdirection gameplay elements of this god need to be consistent to ensure there are no advantages or disadvantages from his various skins. In this Update we are changing how Loki’s stealth audio cue works to improve this concern.

This god relies heavily on one-shot wombo combos, and often struggles if those combos don’t pan out. Ne Zha has a little known feature that protects him after landing if he successfully ults someone, which we are buffing in this update to help him continue fighting even when the kill isn’t guaranteed.

This assassin has also been out of the meta for a little while. This formerly top jungler could definitely use a little help, so power scaling on her primary damage ability is a solid way to do that.

This sharpshooter god is getting a few small buffs to help his lane phase and compound with his key strength: rapid fire basic attacks. Rama sees some rare play in SPL but his ranked and normal stats have been on the lower end, hopefully this push helps him break through some barriers in the duo lane.

The shifts to this god succeeded at taking her down in priority in SPL, but the changes in 9.4 ended up hurting Serqet even more than intended, so we are looking to buff her back in a few ways. These buffs are specifically geared toward helping her in the Jungle role, with better clear from her basic attacks, a key ability getting a cooldown buff, and a slightly faster Ultimate animation, we expect to see a solid improvement from her.

A shiny new passive helped out Sylvanus quite a lot, but he has dropped off since then and the current meta doesn’t seem to be doing him any favors. We are buffing the effect of this new passive to give Sylvanus even more power over reducing his cooldowns if he plays to maximize the effect.

Since we fixed/removed Terra’s ability to double-trigger her abilities, she has dropped off quite heavily. We don’t plan to bring that feature back as it was against the spirit of the kit, so we are looking to apply buffs in different ways. Terra has some very high cooldowns and mana costs that we can bring down to buff this god safely. She is very quick to rise back into pro meta at any time, so a careful touch is required.

Another god that was indirectly nerfed in 9.4 was Thor. The diminishing returns change is often what is cited as creating problems for this god, which we plan to address through this update by increasing his stun duration. However, we want to be very careful and not apply this to gods who don’t need it, and we want to continue to explore other options besides buffing CC durations or making various CC abilities immune to DR. This will be a good test case to help us evaluate future gods in similar positions, although none of the ones we have discussed had lower stats than Thor currently did.

Those who played in the old days of SMITE might remember this ability combo being especially potent. It creates a strong risk/reward situation where Xbalanque can provide a solid amount of burst but will sacrifice his safety for it. This god could use some help and this ability creates some interesting combat scenarios, so we are buffing this aspect of Rising Jaguar.

Still sitting high up on Mount Olympus, Zeus is enjoying his golden age of win% points. With his new found utility, we started taking down some primary damage values, but its had only a small effect. We are hitting him with a key damage cooldown as well as walking back the utility a little bit to make sure he still feels good to play, but has more options for counterplay.