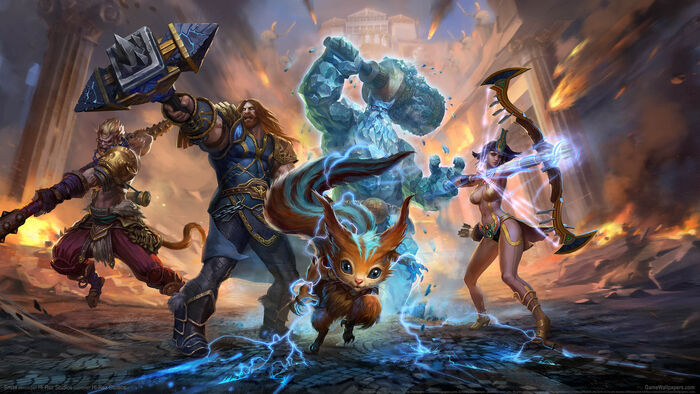 Smite is a free-to-play Multiplayer-Online-Battle-Arena (MOBA) game developed by Hi-Rez Studios. The game pits two teams of five or less players against each other in an attempt to destroy the enemy's base.

Like other MOBA games, Smite pits players in 5v5 matches against each other in a confined arena. The goal of the game is to destroy the other team's base, in this case represented by the enemy Titan, a large boss that must be defeated for the match to end. The first team to destroy the enemy team's Titan wins.

Similar to other MOBAs, Smite follows the three-lane format. Three separate lanes lead to the enemy team's base. Offensive towers guard each lane as set intervals to impede enemy progress. These towers can be destroyed for monetary and experience rewards.

Each team also spawns groups of minions that move towards the enemy base in their respective lanes. Killing these minions provides experience and gold to players. These minions can attack enemy towers and, unless a player attacks an enemy God within range of the tower, will soak tower hits, effectively "tanking" the tower for players.

The official site describes how to play as follows:

In addition to the classic MOBA style gameplay, there are several smaller versions, such as 3v3 Joust or a team deathmatch style Arena.

The main objective of Smite is to work together with your team of characters to destroy the other teams Titan.

The following is a list of the minor objectives that aid in the greater goal of destroying the opposite teams Titan:

1. Killing lane minions: Each team will continuously spawn 3 waves of minions (one for each lane) that will help their team fight toward the enemies Titan. Killing the enemy minions will grant a player gold which can then be spent on items to enhance their power.

2. Killing other gods: Killing an enemy god will grant a player a large sum of xp and temporarily remove the enemy god from the battle field. This is a very effective way to clear a path to a tower so that it can be destroyed uncontested.

3. Destroying towers: The Smite map consists of three "lanes" each containing two towers and a phoenix. Destroying any tower or phoenix will weaken the enemies Titan making it easier for your team to kill it.

4. Killing Jungle minions: In any area of the map that is not a lane or a team base can be found jungle areas. These areas contain small camps of minions that can be killed for experience, gold and temporary buffs to your character's stats. Some of these minions are very powerful and in turn provide powerful bonuses when killed.

All of these objectives are interconnected, and are all mandatory in achieving the ultimate goal of destroying the enemy Titan.

Each Smite team consists of 5 gods or goddesses, each individually controlled by a player.

A good team typically consists of a good mix of ranged and melee damage dealers, magic and physical damage dealers, and different classes, but may vary depending on the strategy used by a team.

Each character has 4 skills that they can use by pressing the 1-4 keys on your keyboard, or X, A, B, Y on Xbox One by default. To access the skill screen in game, press the "k" key. This will show a list of your 4 skills. Keys 1-3 are the "normal" set of abilities, but 4 activates the ultimate, which costs much more mana, has a very long cooldown, and is generally more powerful.

Starting at level 1 you are allotted 1 skill point per level which can be spent on leveling up your skills. Spending 1 point in a skill will make it available for use, and each additional point will increase its effectiveness. Your ultimate skill can only be unlocked once your character reaches level 5, and a new skill point can be added every 5th additional level.

Once you reach the max level of 20, you will have earned the total number of skill points possible.

The key to improving your character's overall effectiveness is to buy items. Smite contains many powerful items that can help to improve your character in many ways.

To purchase items in game, you must first be inside your team's base in the area behind your Titan. Pressing the "b" key will allow you to teleport back to your base after a short delay.

Next, press the the "i" key to pull up the store.

At the top of the store screen will be several filter buttons that will allow you to select the type of items you would like to see. For example, if you are a Physical god who would like to purchase an item that will increase your damage, click the button that says "Power" under the "Offensive" items section and you will then see a list of items that fit the category. You can then skim through these items to determine which one has the stats that you most need.

Each character can hold up to 6 passive items, 2 active items and 2 consumables. Passive items passively grant you bonuses to your stats and some grant other bonuses like on hit effects such as movement slows or auras. Actives, or more commonly known as relics in Smite, are purchasable items that can be activated similarly to your 4 character skills. Once the Active is used it will begin a cooldown time before it can be reused. All of these Relics can be found under the "Relics" filter in the store. Finally, each character also has 2 consumable slots. Consumables can be found under the "Consumables" filter and contain items such as health potions that can be activated to regenerate a small amount of health over time. A player can purchase multiples of the same consumable up to certain number.

There are other game modes found in Smite.

You can find more information about them in the Game Modes page.

Maintaining your lanes by keeping minions and enemy players away from your towers is essential to victory in this genre. At low levels, if you are not certain that you can finish off an enemy player, don't take an unnecessary risk. Losing ground to your opponents in levels, gold, or towers can create a snowball effect that you may never recover from.

Traditional lane composition is 2 players on the outside lanes and 1 player in the middle lane. A ranged character is normally best suited for the middle lane. Concentrate on holding the outer lanes, and communicate with your middle lane as much as possible using quick chat, pings, and normal chat to make sure your middle lane player is leveling quickly and buying items faster than the enemy team. Occasionally, you can play defensive in an outside lane with 1 player to allow for a 2v1 advantage in middle lane (gank).

Sometimes you may find that you need to counter a large push from the enemy team in a single lane. Abandoning any lane for an extended period of time can lead to a match loss. Watch where your minions are on the mini-map. Once enemy minions start meeting yours at the halfway point of the abandoned lane, it's probably a good idea to have at least 1 player move back to that lane to prevent an enemy player from sneaking in to destroy an unguarded tower.

Some players have to develop new habits for playing SMITE when low health comes into play. Because of the third person perspective, it seems a lot of players treat death / respawn like a shooter game. In the DOTA-style / MOBA genre, being dead a lot can really hurt your team and ultimately lose the game.

If you are sitting at low health, it is typically best to recall to your base ("b" key) instead of remaining in lane as an easy kill. With good teamwork, you should have lane coverage while you are healing to full / grabbing the next item for your build.

Destroying towers is a very important part of Smite and can significantly aid in pushing toward the enemy base. Towers can do a large amount of damage to players early on so be careful when near them.

It is also important to note that towers take less damage from players when there are no allied minions nearby. Pushing with minions is the most effective way to take down a tower since they will soak up the tower damage and allow you to deal more.

Jungle buffs are powerful and should be gained by your team as much as possible. If you find that the enemy is not putting much pressure on your lane, it can often be very beneficial to go into the jungle and kill a few minion camps for the buffs. Having a jungler on your team (a player who chooses to play primarily in the jungle instead of a lane) is a great way to secure these buffs for your team.

When deciding whether or not to fight another player, there are several factors to consider. First, What is their level in relation to your own? Typically it is best to only fight another player that is at the same or lower level than you. Higher level players have increased statistical bonuses as well as more highly leveled skills. The exception to this rule would be if you have a team mate there to back you up.

The second factor to consider when picking a fight with another player is location. There are several locations that can be risky when fighting an enemy player. The first location is near a tower or phoenix. Since towers automatically attack you when you attack an enemy player in proximity, doing so will result in a large amount of incoming damage. It is also quite dangerous to attack an enemy surrounded by a full minion wave. This is an especially dangerous act at lower levels when minions are most formidable. As you level up minions are typically less of a threat and killing players near them becomes an easier task. One location that is good to attack another player is in the jungle when they are fighting a jungle camp. Doing this can give you a serious advantage, especially if the enemy player is taking on one of the more powerful jungle minions.

The third factor to consider when thinking about fighting an enemy player is their items. There are several items in Smite that are used to counter the two damage types (physical and magical). If you are playing a character that primarily deals magic damage, it is best to avoid enemies that have a large amount of items that reduce magical damage taken unless you have help from a team mate. It is often best to target players that are either building items that grant the opposite defense to the damage type you do, or to target players that are not building any defensive items at all.

SMITE Cinematic Trailer - 'To Hell & Back'

SMITE - Not Your Typical MOBA
Add a photo to this gallery