The Stranger Things Battle Pass was the sixteenth Battle Pass to be introduced to SMITE and the fourth battle pass in Season 8. It was released on July 13, 2021 and ended on September 21, 2021. 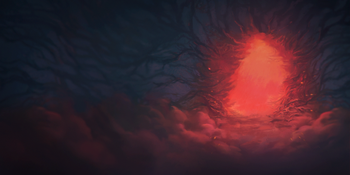 Netflix's Stranger Things joins the Battleground of the Gods with an all-new Battle Pass. This crossover features four skins inspired by the heroes and monsters of the hit show: Eleven, Hopper, The Mind Flayer, and The Demogorgon.

Earn Battle Points while playing SMITE and unlock all kinds of incredible content such as Waffle Avatar, Run! Global Emote, Demodog Ward, and more as you level up through each of the 60 levels.

Get an instant boost by purchasing the Stranger Things PLUS Battle Pass. This option includes the Premium Battle Pass and 13,000 Battle Pass Points which unlock all rewards up to level 25, including The Demogorgon Bakasura.

The SMITE x Stranger Things Battle Pass brings you even more content with the Prestige Track. Once you've completed the first 60 levels of the Battle Pass, go on to earn Prestige rewards including Hopper, P.I. Apollo and Starcourt Eleven Scylla.

Free Rewards for Everyone[]

Every SMITE player earns rewards, even without purchasing the Battle Pass. Begin leveling on day one and unlock awesome loot from the FREE track including The Mind Flayer Player Title, the Eleven Announcer Pack, and more!

Players must accumulate a total of 60,000

Players must accumulate a total of 85,000

All players can complete additional quest objectives to earn extra battle points. There will be 20 quests in total, with two new quests being made available each week. All quests can be completed at any time up to the very end of the battle pass. Completing all quests will grant a total of 10000